Dumplings come in all kinds, but are usually made to increase the calorie count of a meal because of extra people, shortage of more elegant/high cost ingredients or because they are a "comfort food" which I had never heard of until recent years.
For most of my "past life"  I had a large family (six children, of whom five were boys... needing huge amounts of food in their teenage years) and a serious lack of "housekeeping" funds.   This calls for bulk cheap food and a lot of home grown ingredients.  At the time,  I sometimes worried about the kind of food that we were eating, but as a biochemist I had some idea about what we needed and often went against the current trends...  and I think that it has turned out to be a good way to go.

But,  back to the dumplings...  one can feed a family of eight on the smallest chicken available by making use of dumplings, but "chicken and dumplings" is a whole other story.
Tonight I used some cheap meat that had been in the fridge since it was on special last week, though there wasn't much for four of us.  No problem,  I have lots of really good vegetables.

First I lit the fire,  fairly early as the meat would need a while to cook to be tender.  Once the fire was going well,  I put a heavy pot on the stove and heated that as well.  While it heated, I sliced the meat in to thin strips and "floured" it.  Once the pot was hot,  I put some olive oil (from Rosedale) into the pan and, once hot, I added the meat strips... stirring and watching to make sure that they were browning, but not burning of course.
Removed the meat, and then began on the vegetables...  in this case, onions, carrots, celery, broccoli, cauliflower, potatoes and some herbs from the garden.   (I would have added some leafy green stuff if I'd been short of vegetables,  but I seemed to have plenty.)
I added more oil, dropped the vegetables in and once they were sizzling well,  I added the rest of the flour (left over from the meat flouring) and stirred.  Added a jar of tomatoes (bottled in 2009 with salt and basil) and stirred.  Put the meat back in and cover for an hour or so.... 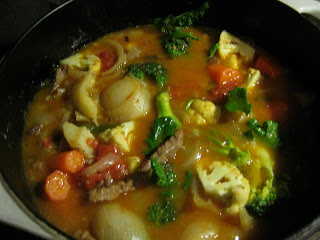 This is when the decision needs to be made about dumplings.
There's quite a bit here,  but not as much carbohydrate as I would have liked.  (I am getting less potatoes in the yard now.)
And so  I decide to go with the dumplings....

There are two ways to go... soggier ones that can be dropped from a spoon onto the mixture,  or a more "scone-like" mixture that can be shaped and made into separate pieces.

For my quantities,  I used 1 large cup of flour, 2 teaspoons of baking powder, about 2 tablespoons of butter, and milk to make the consistency desired.  I don't often add salt as there is salt in the butter an din the gravy...  and we don't need much anyway.
Rub the butter into the flour/baking powder mixture.
Using a knife, mix the milk into the flour until it is like a scone dough.  Today I added the tops of the onions (already cooked in the pot) to the flour before adding the milk.  (You could add any herbs at this stage.)
Roll out the mixture... about half an inch thick and 10 inches in diameter.  Cut into eighths (or whatever) and place on top of the stewy mixture.
Put the lid on and DON'T take it off for about 10-15 minutes.  (Remembering to watch the fire of course.)  Don't be tempted to look, as the steam is what cooks the dough... think of it as an oven.  The first time that you do this,  you will probably look and let the steam out.  This will mean cooking the whole thing for a bit longer and risking it sticking on the bottom.  But jsut remember that most people have done the same thing and it's not the end of the world... just try not to look :)
If you have a stove with a gas or electric control,  you could turn it down now and cook it a bit more slowly.  On the wood stove,  just don't add any more wood now.

Then lift the lid and it should look like this.... 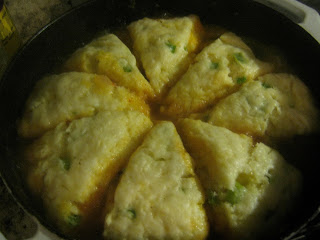 With "chicken and dumplings" I have usually made the soggier version and dropped it in spoonfuls onto the chicken mixture.  With the soggier mixture, one egg makes the mixture more manageable.

It is near mid-winter here,  so we don't have an excess of eggs, consequently there is no egg in this mix.  If you have eggs a-plenty, then add an egg or two with the milk.  This is particularly significant if you have children who need a higher protein addition.  (We are all older....  tonight we were 24, 33, 62, 64.....  and the protein is not a dietary requirement to that extent,  though nice when you have it.)

There is something about cooking meals like this that make a connection to women (and 99% of them were women) who needed to provide food for large families on an inadequate income.  There are many skills that have disappeared into the mists of time,  but I hope that this doesn't.  Perhaps food security,  or the lack of it,  will make even these skills important.

Fiona (posts by her mum and dad) said...

Can you come over to make dumplings in santa cruz tonight?