Yesterday I went out "corfluting"...  putting up election posters between here and Pt Wakefield.  It took me six hours and I was very tired when I arrived home.
Chris had already lit the stove (and the fire in the living room) so I quickly put a pot on the stove an cooked a big stew.... and while that cooked,  I made a batch of bread dough, of which I cooked some as rolls with that stew.  No pictures... a big rush and a tired cook!

Tonight we'll have soup... lentil and rice soup with whatever I can find from the garden....  broccolini, carrots, celery and some onion and potatoes from the cupboard. 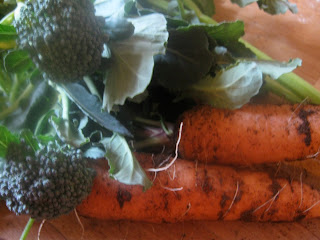 There are a few rolls left over from last night....  (some disappeared during the grazing sessions during the day).... 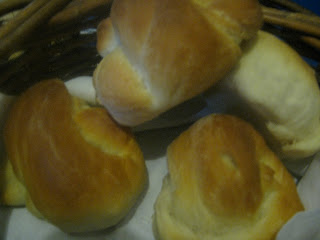 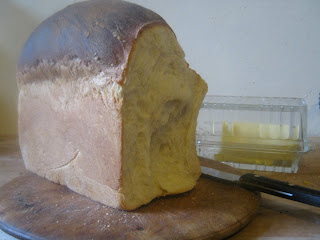 .... and whenever I see it or cut one,  I am reminded of the loaves that were delivered to our front verandah when I was a child.
Money was left on the verandah in a bread crock and by the time I arrived home from school the "baker"  would have left a "half loaf"  with an end like this.  I had never seen bread in a plastic bag, or sliced, at that time....  it would be wrapped in a sheet of tissue paper,   but only where your hands would touch it as you put it in the crock.   The baker's cart was pulled by a horse which knew where to stop and waited as the deliveries were made.  (My grandmother used to run out with a bucket and spade if the horse should poo in front of our house... though there was competition for this free gift for the garden.)
When I arrived home,  the bread would be warm and the fresh flaky front could be peeled off and eaten on the verandah.
With this (pictured above) loaf,  this is still possible!  The soft fresh end of the loaf is just beautiful and somehow still a little bit sneaky.

The soup is nearly ready....  lentils, rice and vegetables.... 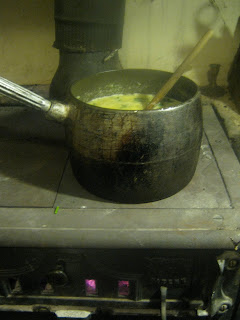 ... and we are warm in the kitchen as well.
There is more corfluting to do,  and once I get the council business, Carer's Link (where I am a board member) business and some vegetables planted (I need to plant something every week in order to eat every week)  I'll be out there again with the corflutes.... 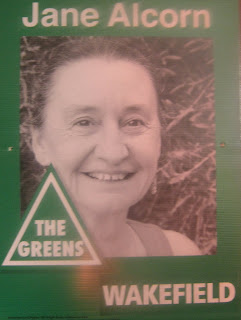 ... this time for Wakefield in the federal election.

Fiona (posts by her mum and dad) said...

PLease deliver one loaf to my doorstep. MMMMM