Autumn is over… and we are close to winter.

This autumn season has been unusual to say the least… warm enough for the fruit trees to flower a second time, record heat in fact, and 49 mm of rain… enough to be able to stop watering regularly.
I am picking peas, leafy greens, plenty of lettuce, potatoes, pumpkins, and the remains of summer treats (eggplant and capsicums) and the chickens are still laying.

I cut the pumpkins from their vines yesterday…. 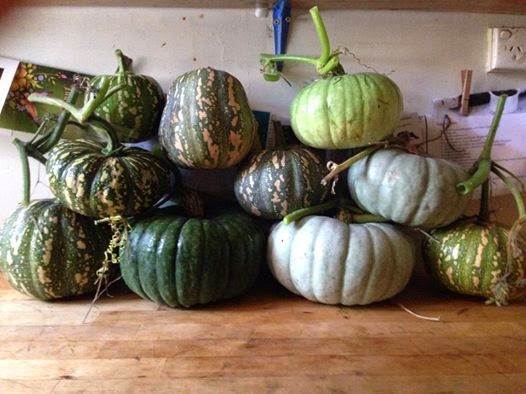 …. ten of them…. a motley lot,  but that is what you get when you plant the seeds from the pumpkins that you're eating.

The broad beans are growing, and the carrots look nearly ready to start picking….  a foody gaarden.
2 comments:

After catching up with the growth in the garden yesterday,  I began to think about the kinds of plants that I am growing and how to decide what to plant next.

I have an acre of land, in total,  but with a house, shed and some old outbuildings, the chook run and the goat pen and some patches that are hard to cultivate for vegetables because of some really large trees,  the "productive patch" is quite reduced.  However,  it is hard to tell where the "productive" part ends and the rest starts.  One of the old trees has bees living in it.  They have been there for years and they are the main pollinators for my vegetables.  I haven't raided the hive (for honey)  for years but the hive could hardly be left in the unproductive list and it's the same with the birds.  I have a significant population of native and non-native species and many of these are insectivorous.  There are lizards and frogs and an assortment of other creatures and, if nothing else,  I know that the soil and plants are healthy while all of these creatures survive and prosper.

In the past I have planted quite a variety of odd and interesting vegetables.  Some have been successful and some… not so much.  I like to try a few new varieties most years. However, this year, after a chaotic patch in hte rest of my life,  I have mostly stuck to the tried and true and to seeds that I have saved and everything seems to be thriving and producing plenty of food.  With these varieties,  I still have enough variety for health, quite diverse meals with still plenty of new recipes to try, all seasonally,   of course.

As I have often mentioned previously,  the "trick" to growing food in my patch is understanding the soil and I suspect that this is the most useful procedure in most places.  In my garden,  I have clay soil overlying limestone that is situated on a very old continent (hence the small particles making up the soil) that has been leached of minerals over many millions of years.  It is said to be poor, alkaline and "non-wetting" soil and I have been advised on many occasions that it "won't grow much".

Most of the fields here are cultivated ready for planting,  covered with herbicides and then seeds and  superphosphate… with further additions of nitrogen (which makes the green leaves a brilliant colour later in the season) and then wait for winter rain.  The soil seems to be similar to a hydroponic substrate with seeds and nutrients added (pesticides as needed) and just wait for the crop to grow.  The fertiliser that is added is superphosphate and this is made from minerals, some of which are mined and are past peak production, notably rock phosphate from very old deposits.  Phosphate fertiliser was invented many years ago,   and has since been improved by adding trace elements as these become depleted in soil that is used over and over again without retuning any minerals as they are used and exported.  In my part of Australia,  the level of trace elements was low to begin with because of this leaching by rain and run-off over millions of years and so this discovery of additives for superphosphate has been spectacular and plants have been bred especially to suit the new products….  this was  called the green revolution.

The problem with this strategy is that the soil materials are used up,  often harvested and shipped off, and the phosphate, nitrogen and potassium has to be replaced annually, along with some of the trace elements that are in short supply.  Peak phosphate is a serious issue, but so is peak oil.  The energy required to produce the inputs for our major food plants in not sustainable.  Adding valuable nutrients to the soil to grow crops, only to harvest and ship the nutrients away or flush them down the toilet and often out to sea is shortsighted.  Recycling in this context is absolutely essential.

This is not new information.  Peasant farmers for thousands of years have known that for soil productivity to be maintained essential nutrients need to be conserved and recycled.  It is only since the "green revolution" that this "hydroponic" method has been used and with it,  the energy input when compared with energy output has escalated greatly.

But,  back to my garden….  I compost all of the weeds and whatever is able to grow in the soil here.  The plants with nice deep roots are able to retrieve any minerals that are available further down than some of my vegetables are able to.  I have added rock dust instead of soluble mineral fertilisers that have to be added frequently and I have added every kind of organic matter to the soil that I can find.  My garden beds look as though I have imported soil to make them into "raised beds" but, in fact,  I have only dug and added organic material (mostly composted weeds and chicken droppings) until the volume of the soil is significantly increased and I am left with "raised beds.  These are also quite useful for the clay soil which, once wet, remains so for longer than the looser, sandier soils that I sometimes envy.   However, this soil is different from that which I found when I first moved here.  The perfect hard-packed clay was hard to dig, and water would not penetrate it.  When I broke the surface,  the fine powder could blow away, and if water was added, it sat in a pool contained by its own surface tension.  Eventually,  over the winter,  the soil does get wetter and heavier and plastic…  only to crack in patterns reminiscent of a clay pan in the bush as it dries out.  There are still parts of the yard like that.  But where I have been adding straw, rock dust and compost, the soil is darker, crumbly and full of worms.  Those worms are my indicators of health.  My grandmother used to tell me that worms indicated "good soil" and that is true. It is also true that the millions of micro-organisms and fungi that are mostly unseen,  but which need the same conditions as all of those worms are just as important.  The worms are the "canaries in the coal mine" for me….  indicating that the soil is healthy.

Charles Darwin has written a whole book about the production of soil by earthworms.  It is fascinating reading and emphasises the significance of these creatures... 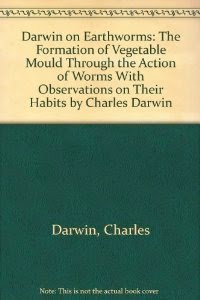 … and it is re-published, and available again apparently.  The text is available online…

I am not sure how modern pesticides change the soil micro-organisms and their "canaries", the worms,  but I am suspicious that weeding with glyphosate, even in backyard gardens does more harm than good as far as the soil goes.

A more up-to-date publication by David Montgomery about the importance of soil was published in 2007. 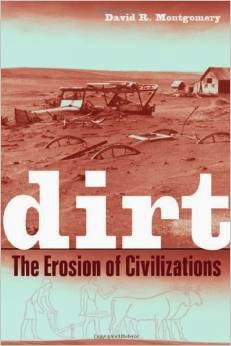 This describes our dependence on the soil for our survival.

This is what I have been thinking as I pull deep-rooted marshmallow weeds, stinging nettles and some thistles for the chickens  before collecting enough food for my dinner this evening.

There have been a few warm days,  some rain and, while there are still a few jobs to do,  it is the time to sit and watch some of the plants grow.  While the soil is still warm and the rain is plentiful, the garden is growing fast (incuding the weeds!)
The view from the verandah is lovely…  the the vegetables are all doing well,  and I have more or less kept up with the weeding. 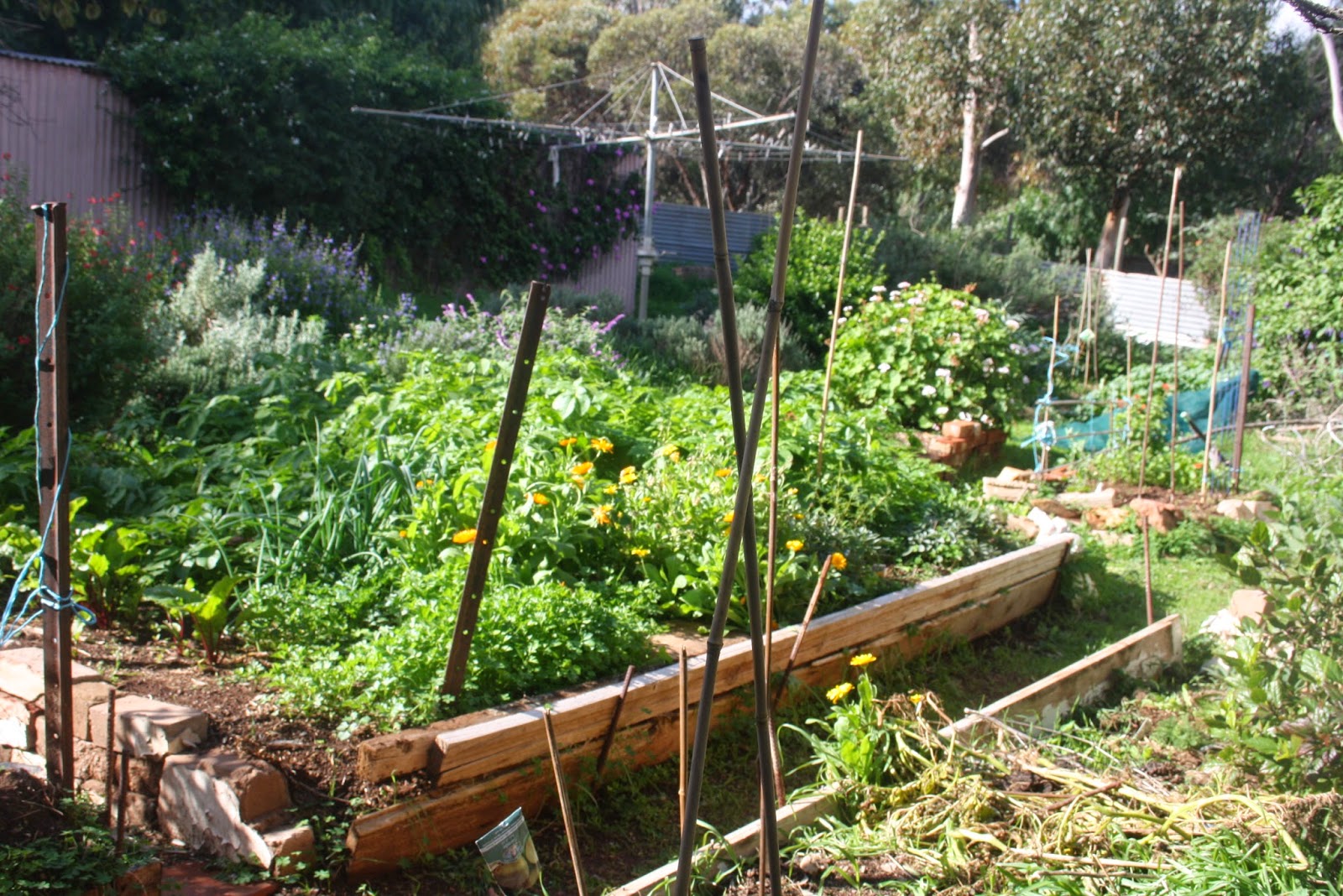 The big patch of green in the middle is the remainder of the potatoes.  The yellow flowers are calendula, the purple ones are an assortment of salvias and the little clump of green in the fore-ground is parsley that has self-sown  and which I will raid for tabouli.

This morning I have been out pulling tiny weeds from the latest carrot seeds to emerge…. 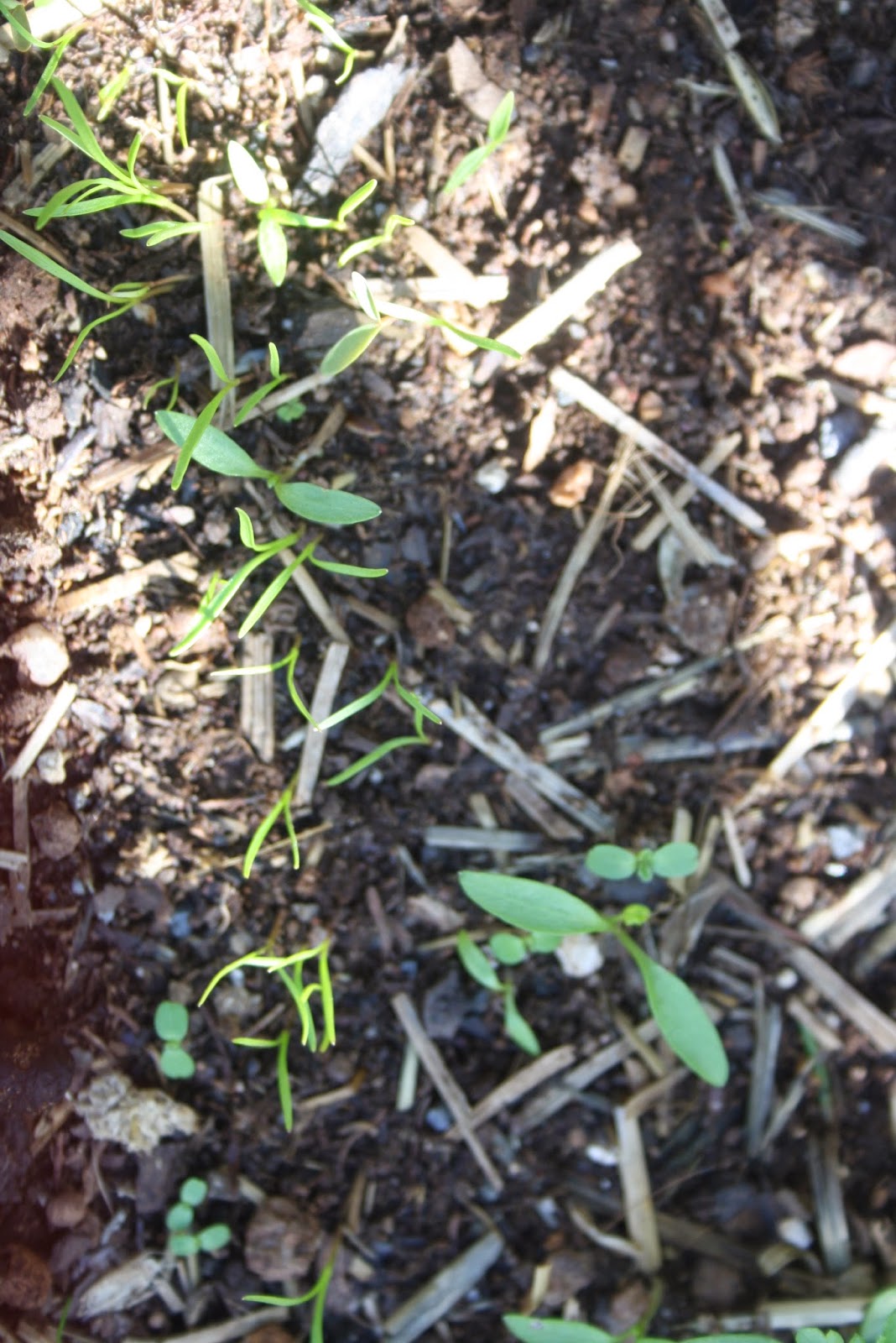 … the carrots are the ones with the long skinny first leaves.  The larger eliptical shaped leaves are parsley plants.  These grew here last year and have self-seeded.  I already have plenty of others, and they will out-compete the carrots,  so I am pulling those out.  The tiny round leaves are stinging nettles. I am pulling those out of this patch too,  though I don't usually mind them too much.  They never get deep roots and can be pulled at any time and they make wonderful liquid fertiliser when soaked in water and chook poo.  I will  have to thin the carrots quite a bit too,  but I'll leave that for a couple of weeks until I can see which are the healthiest looking plants.

The previously planted, weeded and thinned carrots are doing well…. 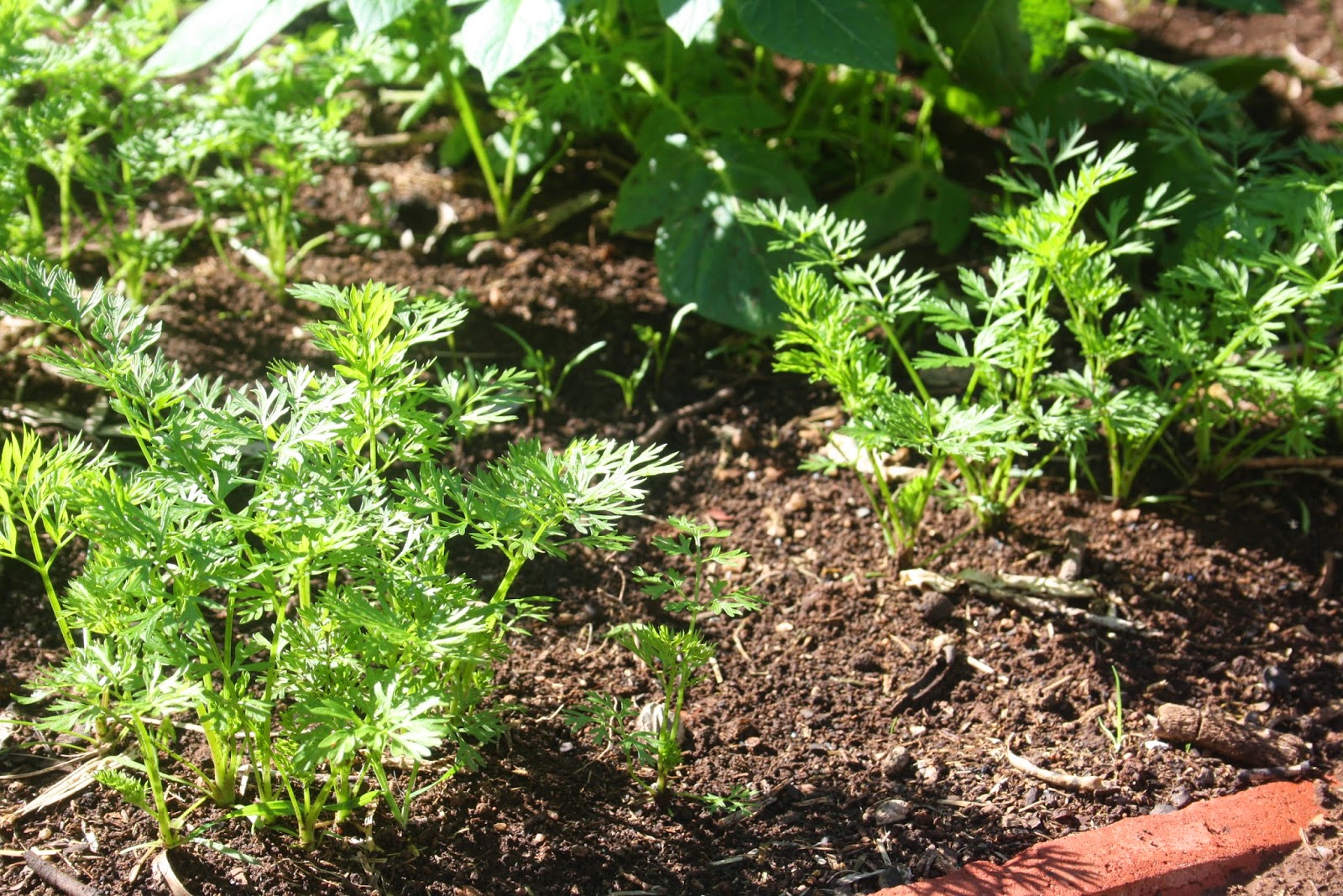 …. they are slow growing,  but healthy.

Meanwhile I am picking cos lettuces…. 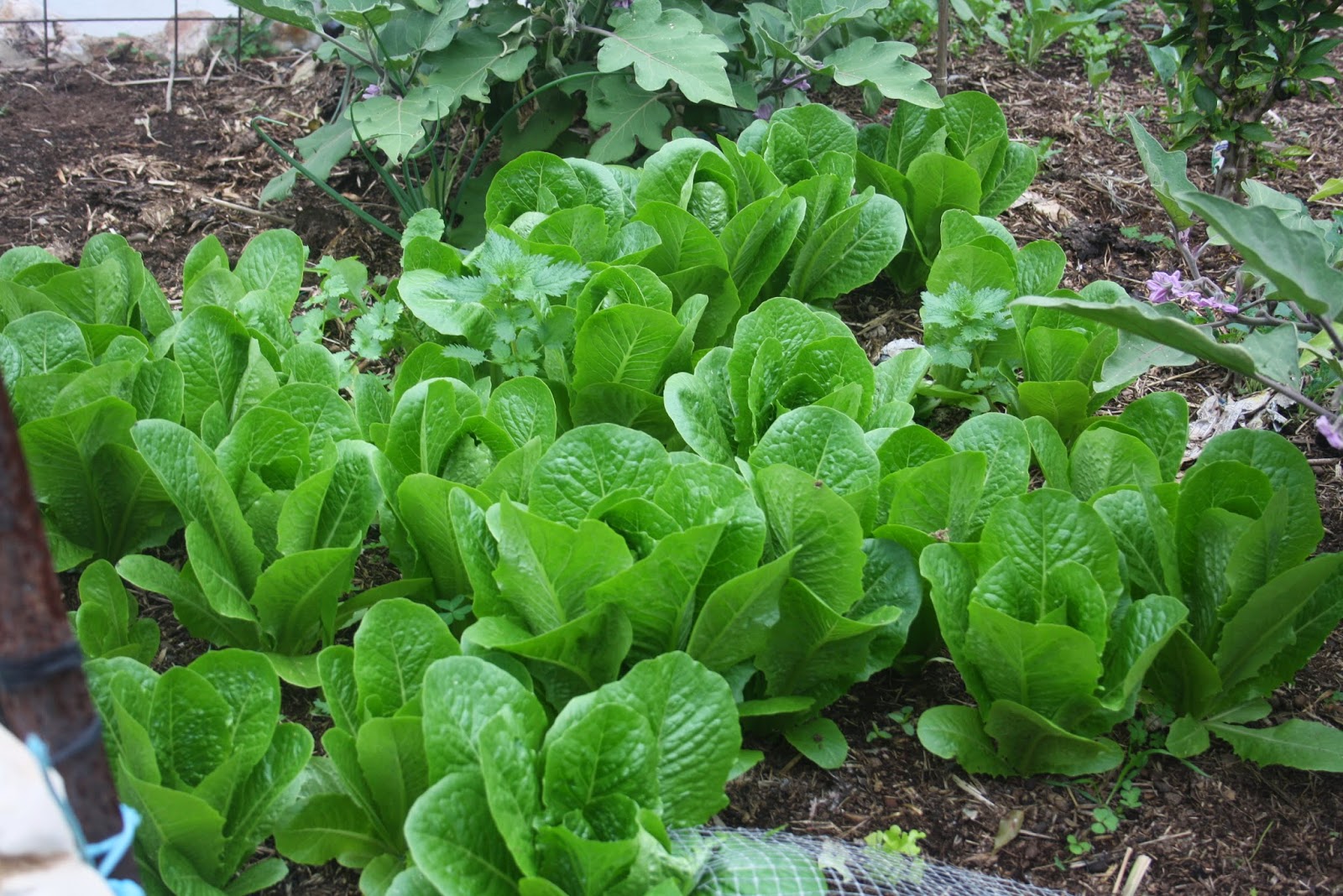 … so that the rows are beginning to look a bit untidy.  But there is a whole other part of gardening…  one has to pick the "fruits of one's labours" as they mature and the neat rows or pleasantly organised garden come apart bit by bit.

Other vegetables are looking healthy….  beetroot…. quite a few of these this year… several bunches in this little patch…. 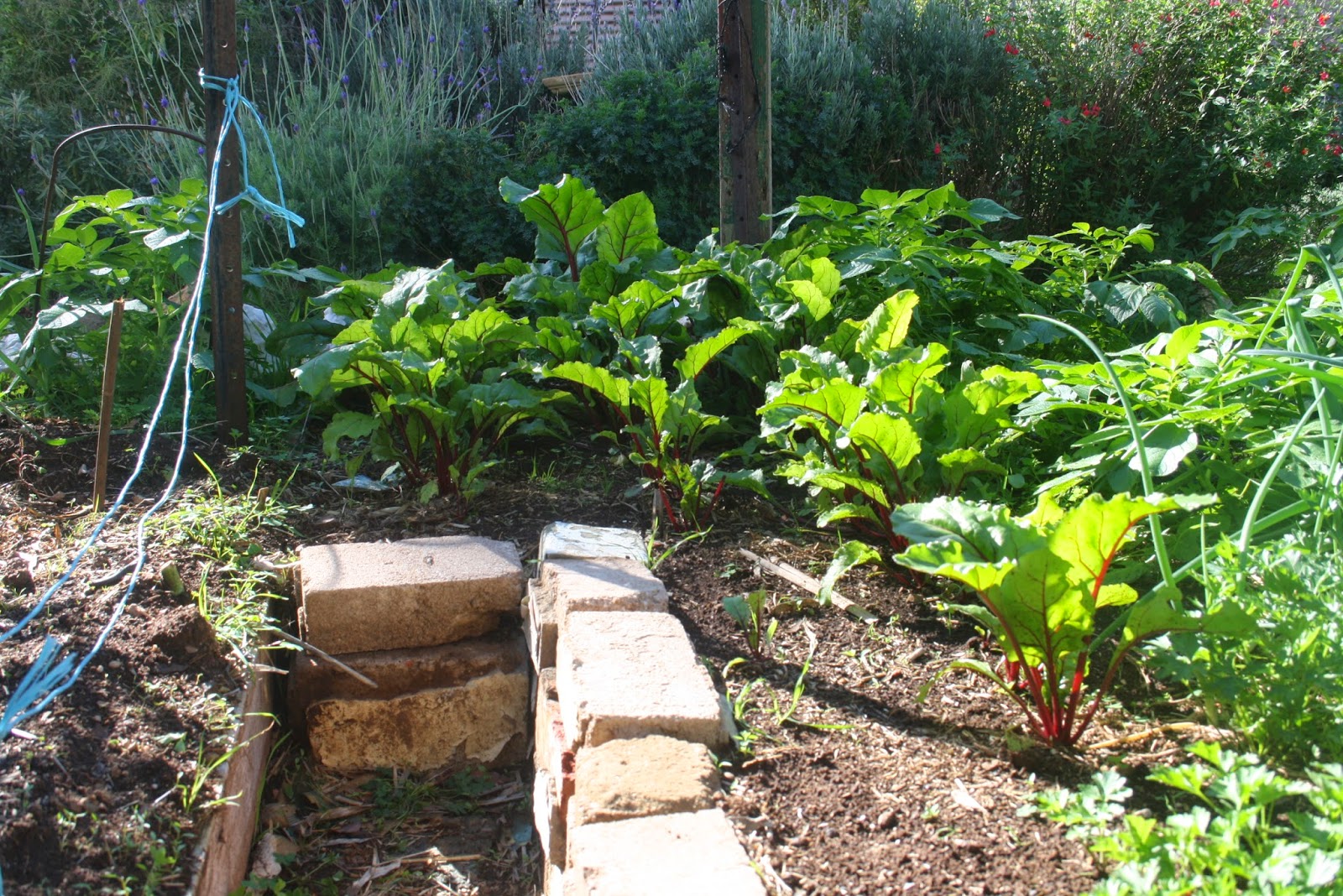 ….  eggplants… and in the last few warm weeks another 10 or more have set…. 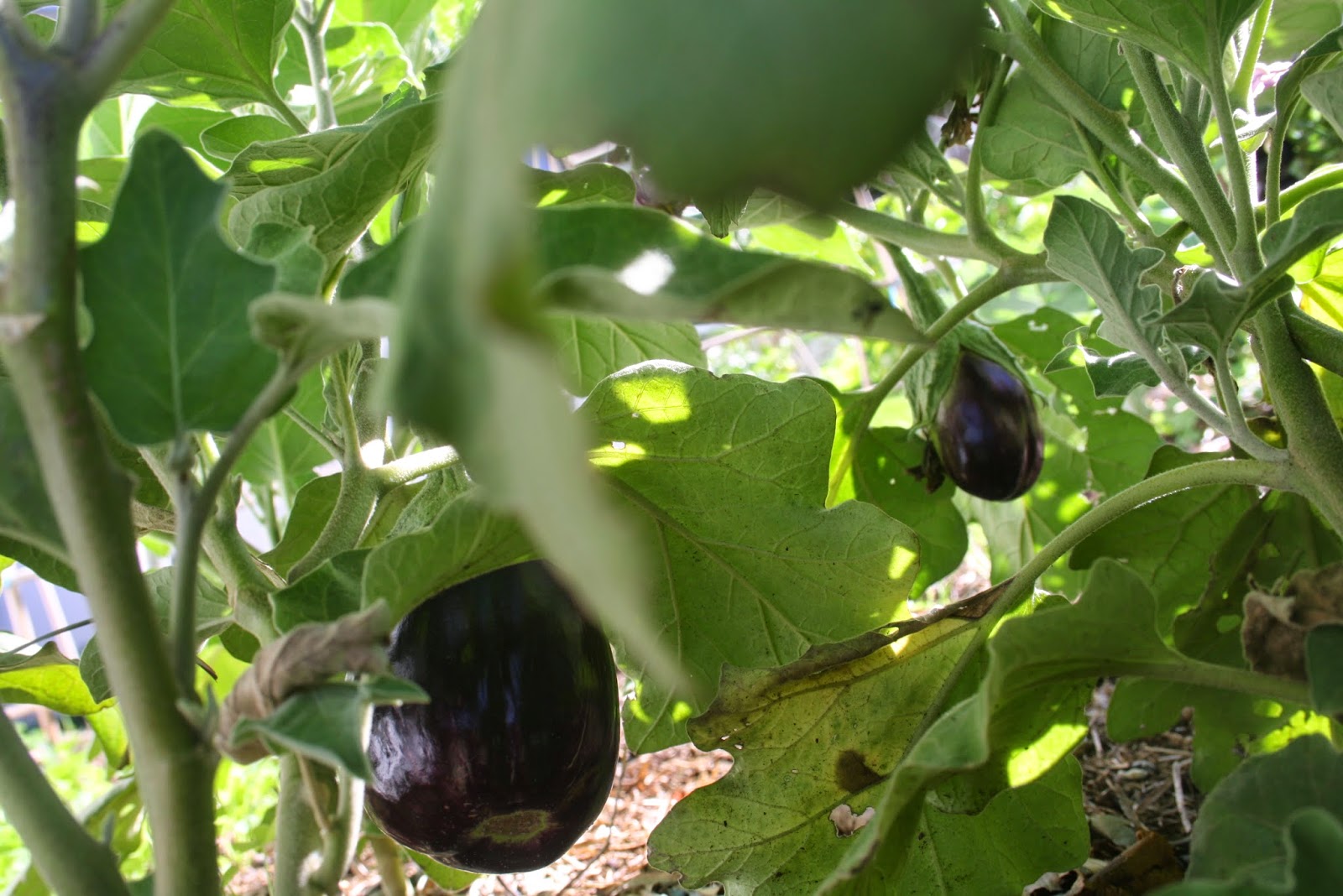 … the feijoas (pineapple guavas) are ripening.  This is truly interesting as the plant has been here for about ten years, never producing,  but after removing a buddliea from close by,  it has flowered and produced quite a few fruits this year.) 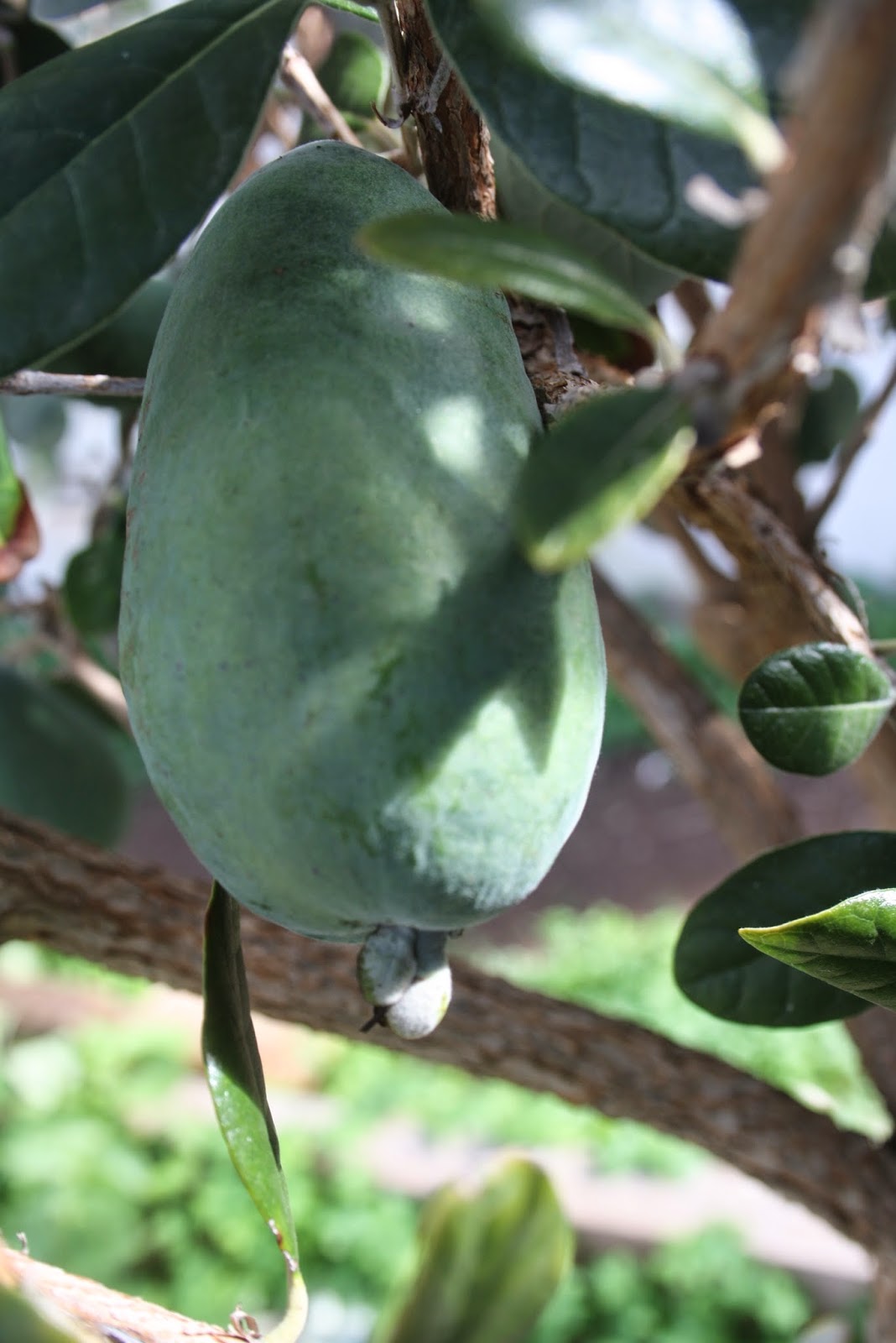 The peas are just beginning to fill some pods.  These are the ones that need to be shelled.  The snow peas haven't come up yet.  Neither have the broad beans. 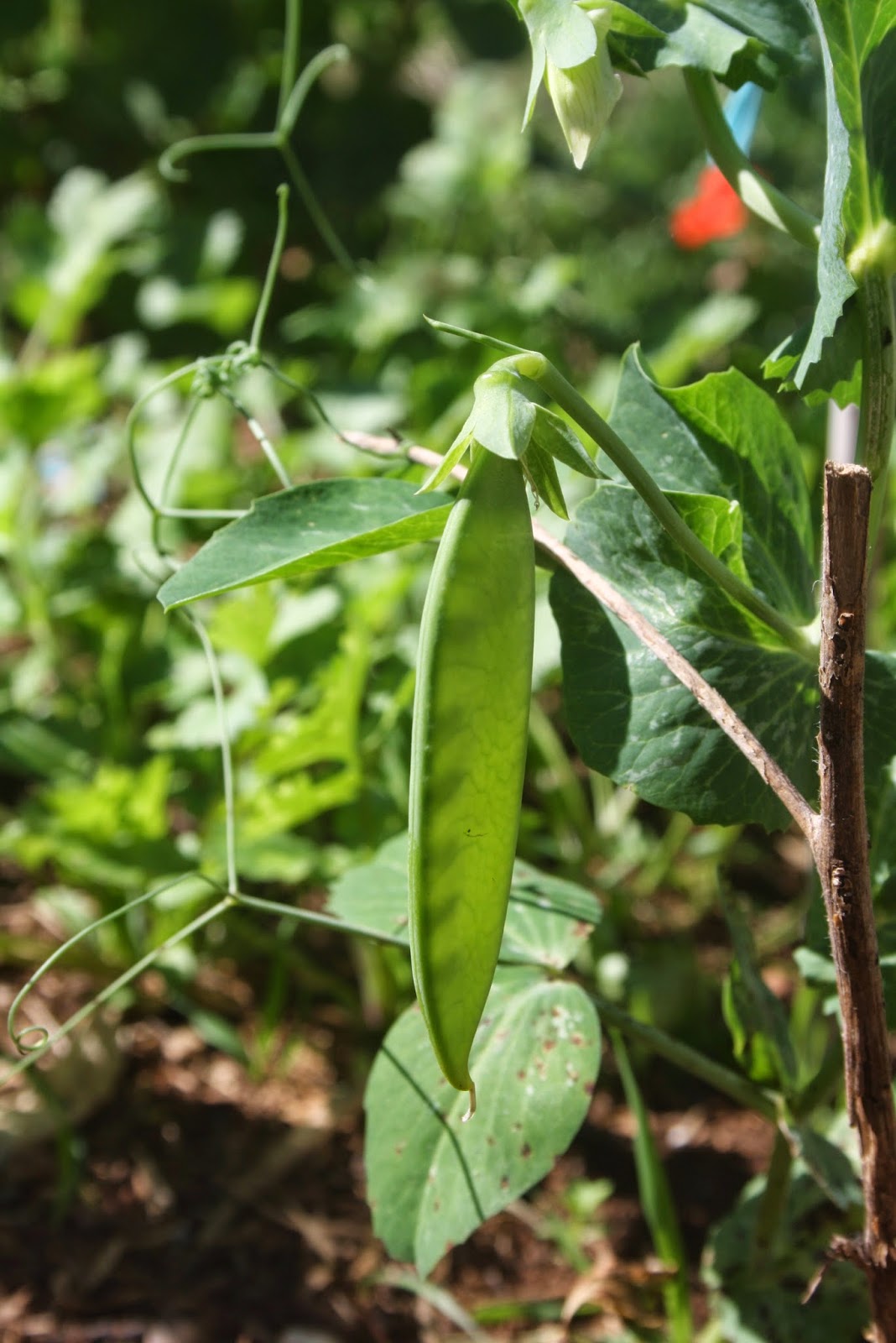 … and the first broccoli top is beginning to form… quite a way to go yet,  but this will be the first one for the year….. 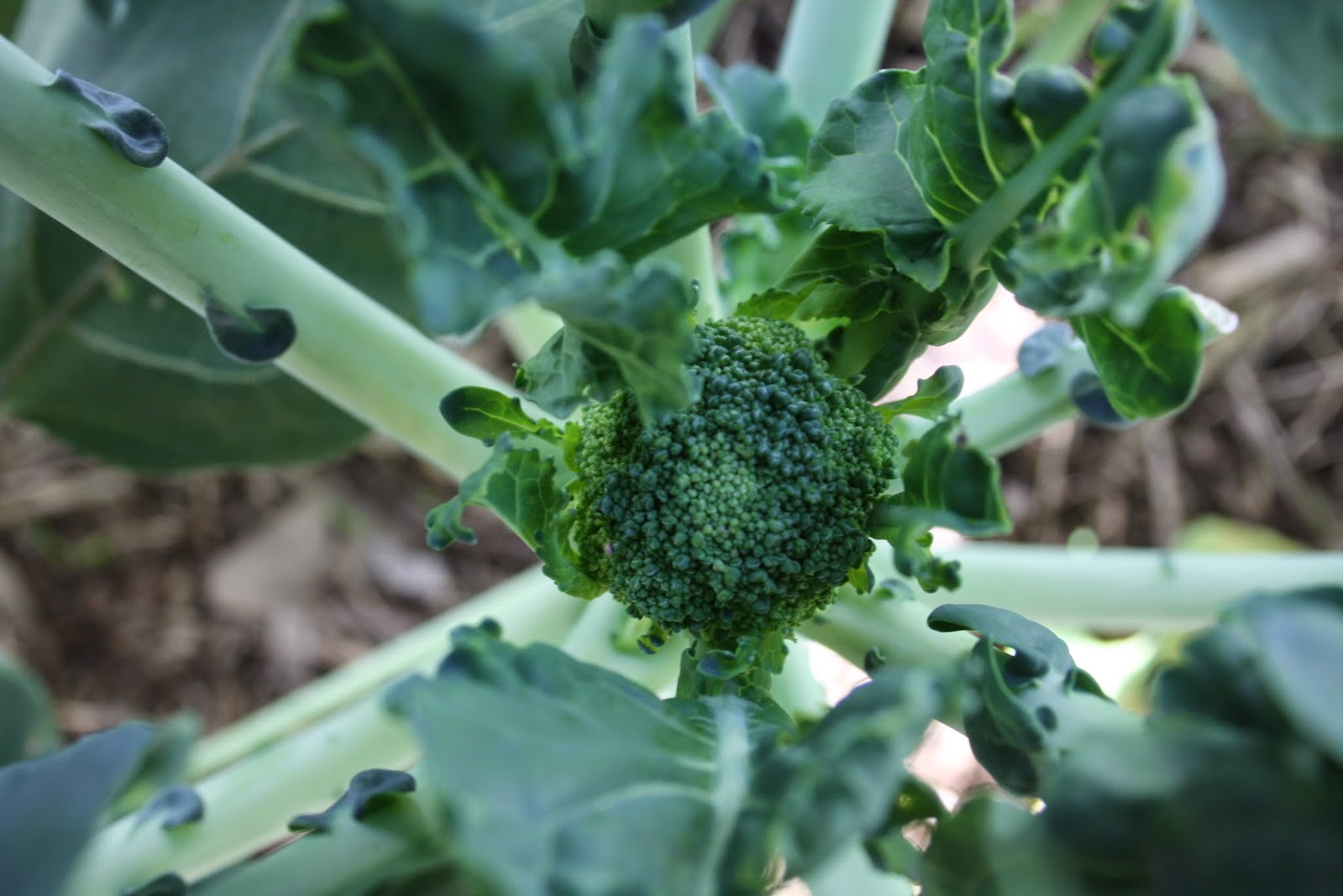 Meanwhile I have been cutting back and pruning quite a few other garden plants.  Some. I have needed to put into pots just in case we have a frost during the winter, though for the last two winters we have not.  The climate is changing, but is likely to be more chaotic too, so I'mm keeping my options open,  so to speak.   The potted pieces will stay inside until the spring and can be re-planted at that time. Those incude Vietnamese mint (or Vietnamese coriander…  or laksa plant, depending upon who one is quoting) lemon grass and marjoram.  I have moved the banana plant inside and a few other more frost tender varieties.

Some plants I have pruned and stuck into pots just to have some more specimens in the garden next year.   This pot holds three cuttings of a salvia that is native to Somalia  (I love salvias) and it appears that all of them appear to have been successful… 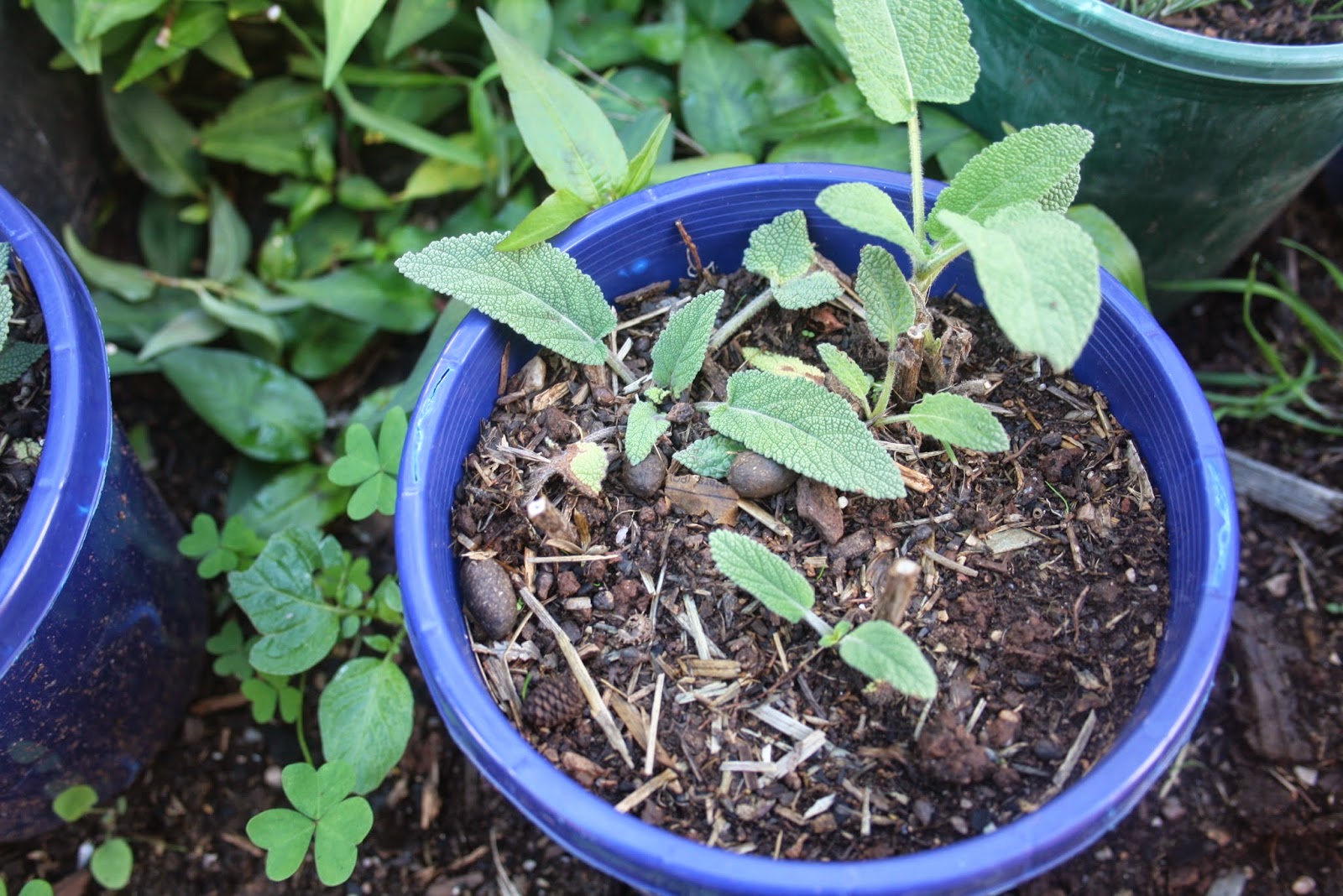 I may end up with a Somali hedge somewhere next summer!