As I weeded a patch of herbs today,  I was thinking of pizza.  The aroma of thyme always reminds me of pizza and it seems such a long time since I made pizza for dinner….  perhaps one night this week….

Thyme does well here in winter.  In summer it struggles….  perhaps it is the lack of water or the actual heat,  but at this time of year there is plenty…. 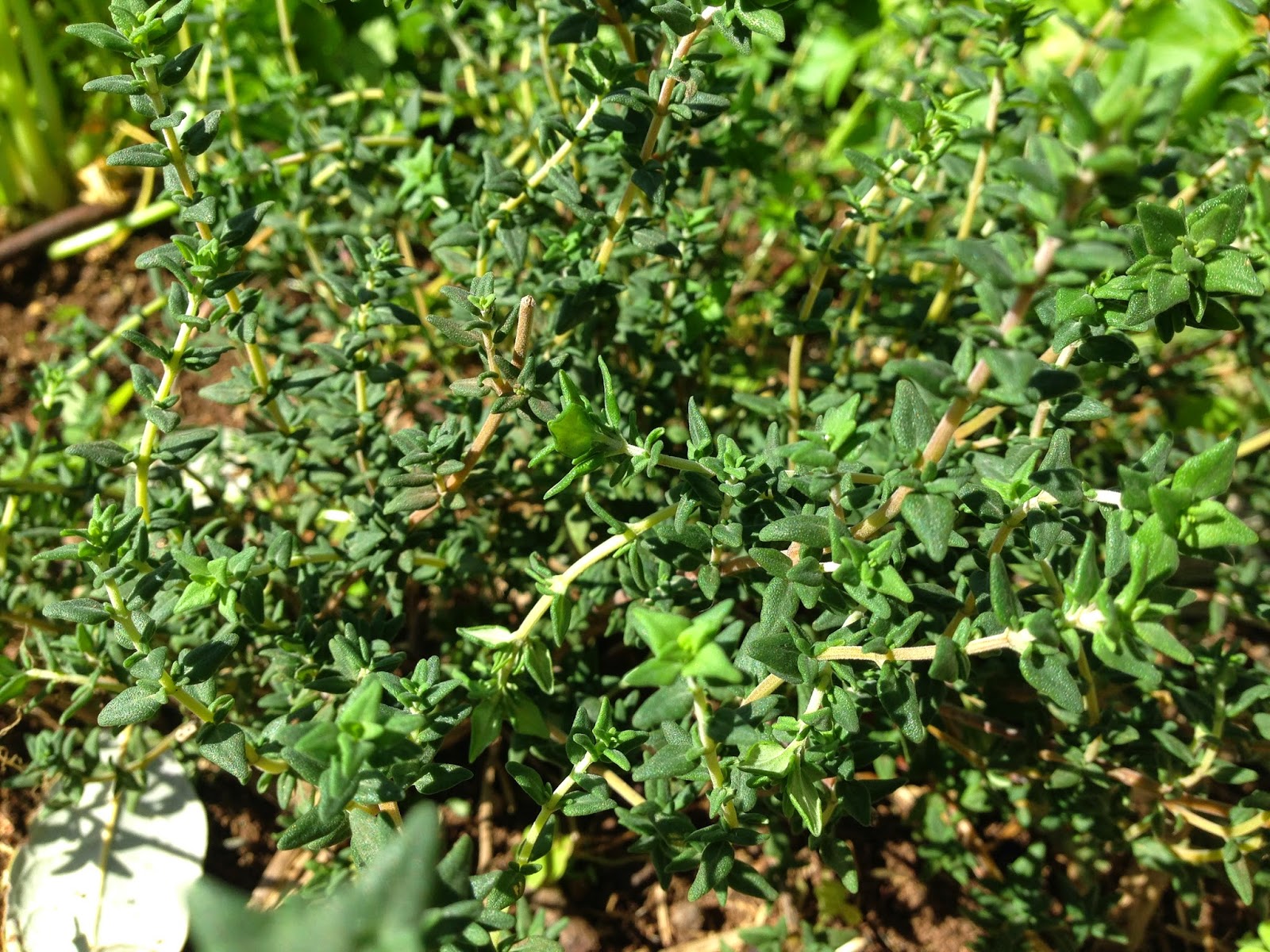 Others that are doing very well at the moment are parsley…. 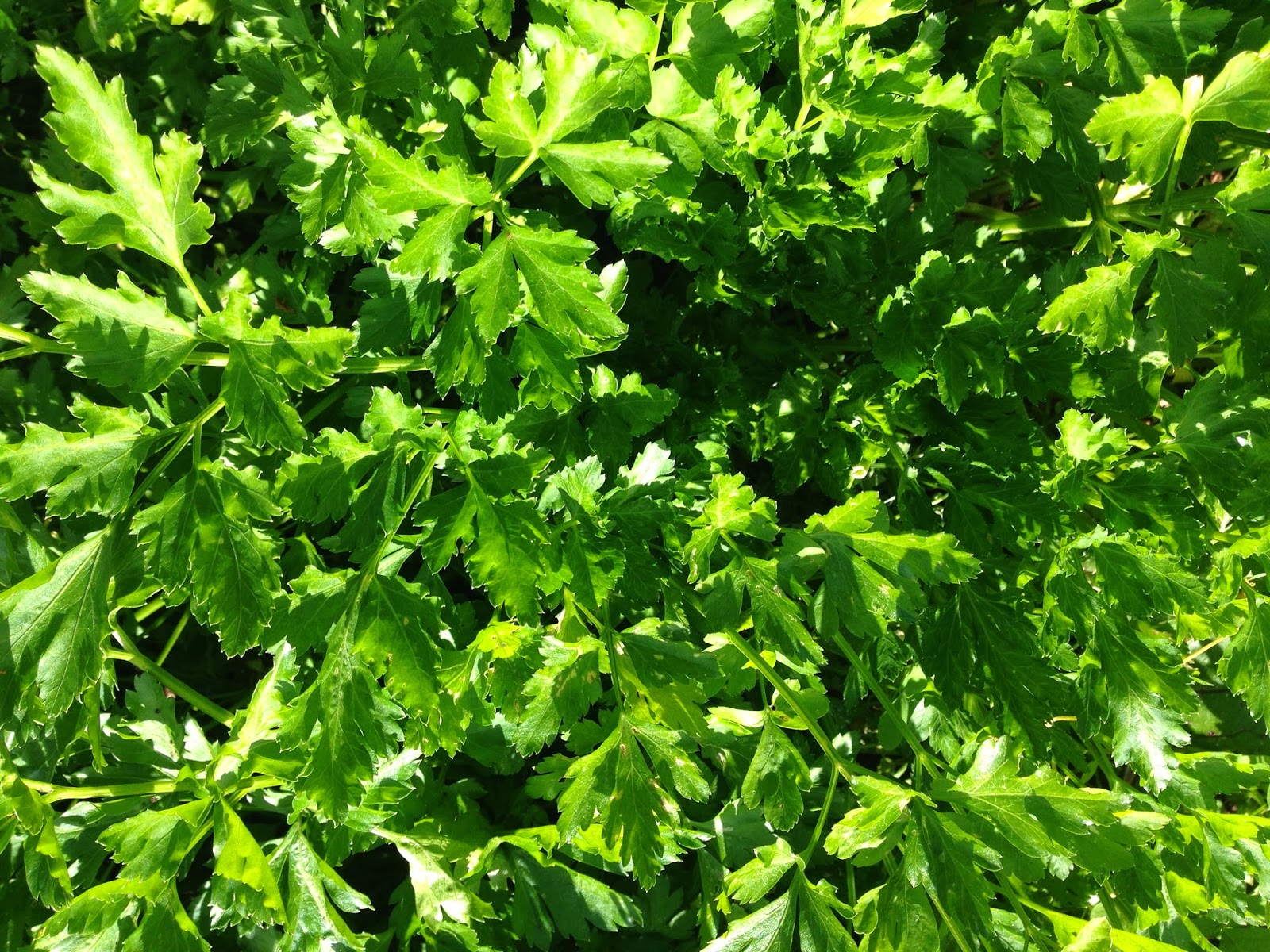 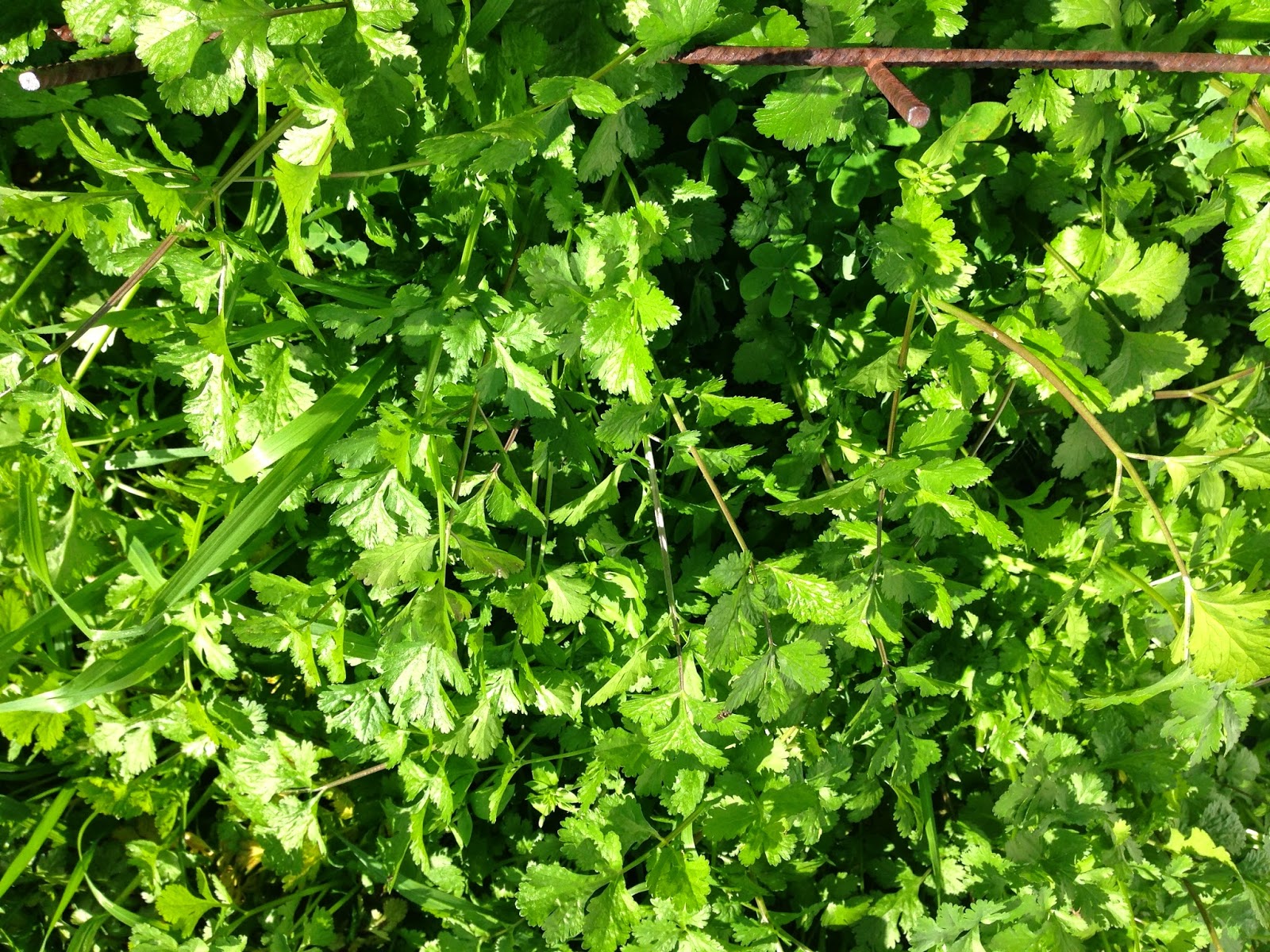 While sage is still growing, though obviousy not as "happy" with the winter weather and frosts as some other varieties. 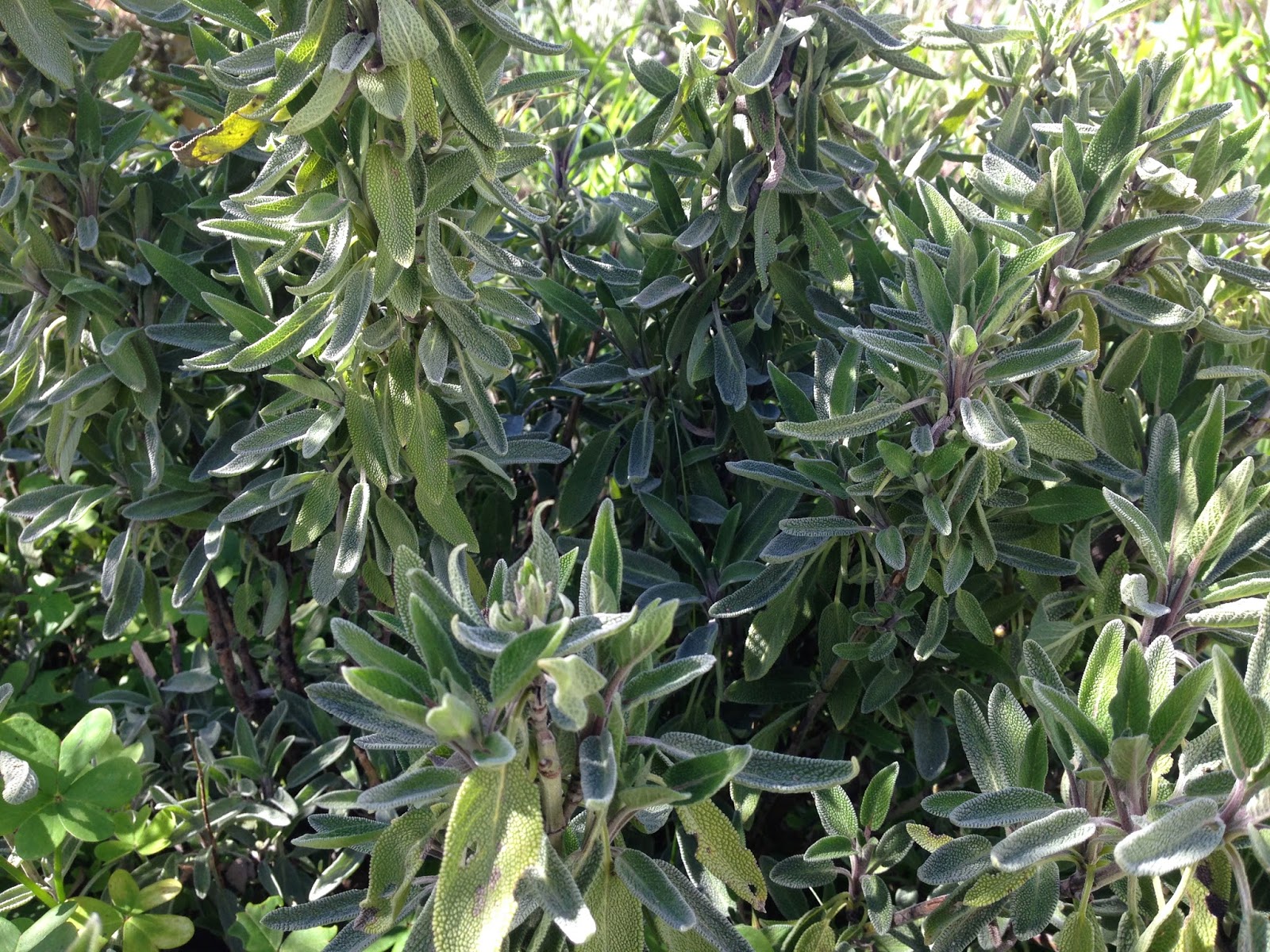 Herbs and vegetables both come and go during the year,  but there is always something out there for dinner…. 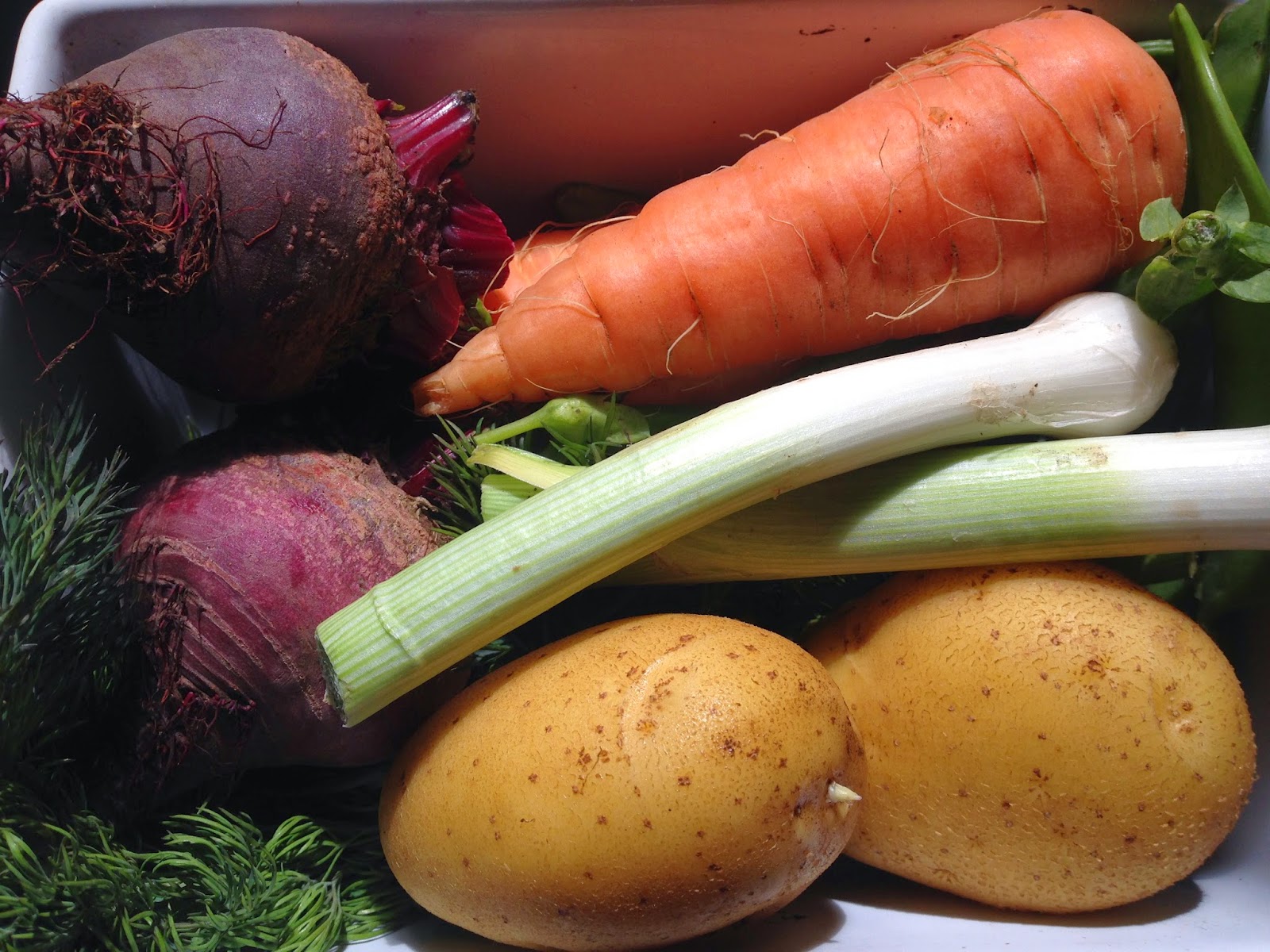 The garden continues to supply most of my food. Winter means one of those ongoing soups that is boiled up daily,  and added to… with whatever is in the garden.  Today's soup has potato, carrots, cauliflower, some herbs and leafy greens, lentils, noodles made from eggs and four-leaf flour and a big spoonful of tomato paste that I made last summer… and probably some bits that I have forgotten from a couple of days ago. 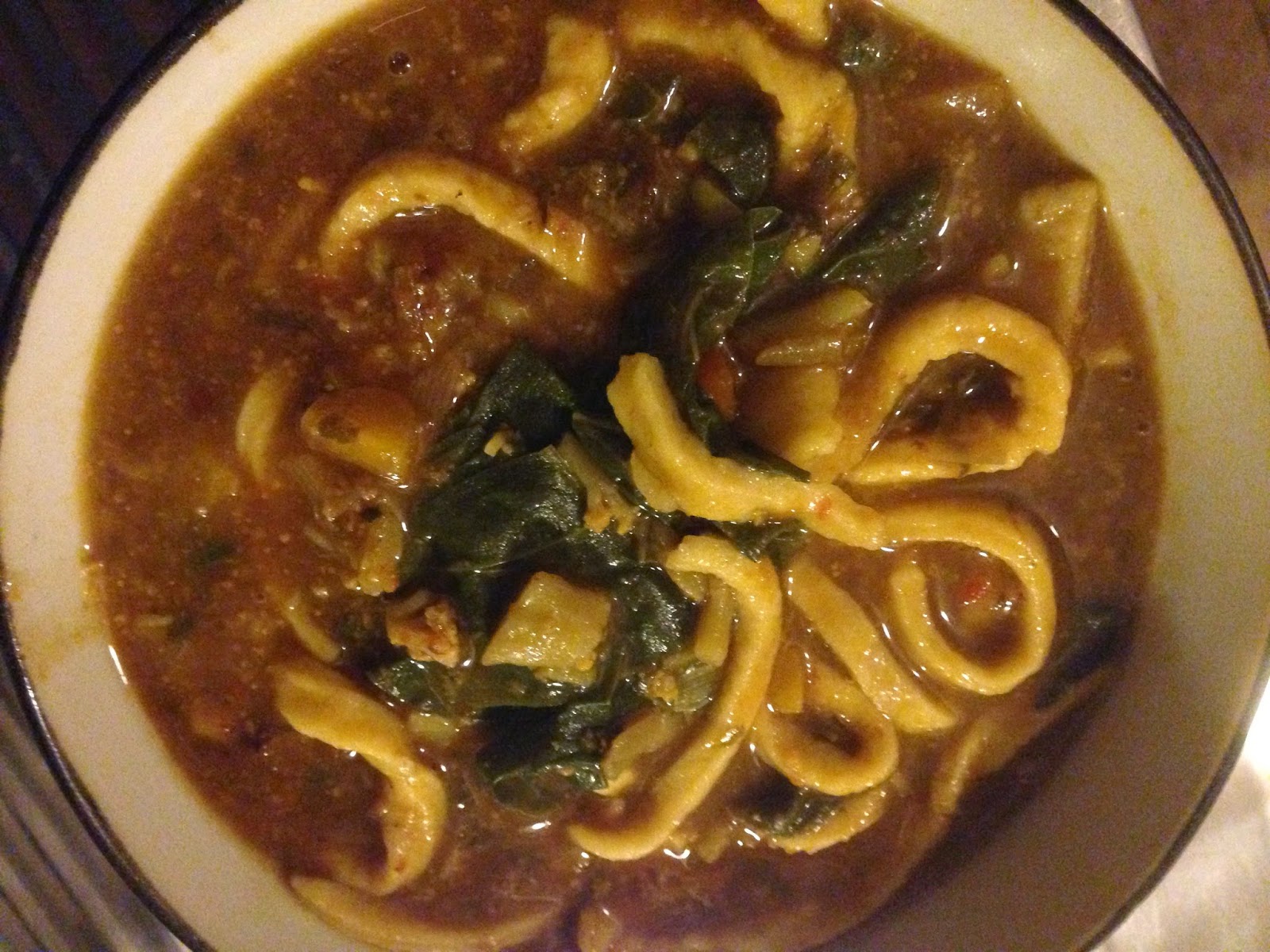 Probably not the most elegant of meals,  but it is very tasty and probably pretty healthy too.

I have seen people grow vegetables and leave them in the yard until they are past their prime, eaten by some other organism or because it's too much trouble to gather them.  I often wonder whether people are so used to vegetables coming packed in polystyrene platters or mesh or plastic bags that the odd assortment that one can pick or dig from the garden is too complicated.  It really is quite a change in habits to get used to eating what comes from the garden…  particularly when some vegetables really are seasonal and unavailable for months at  a time.

Recipe books seem to ignore the seasonal availability of various ingredients.  There is often a list of food items to gather in order to make a particular meal… but the expectation is that locally unavailable items can be transported… often from the other side of the world… so that the recipe can be replicated as described.  When cooking from the garden,  it's better to look at "ethnic" combinations of ingredients which have been worked out using those foods that ripen or are available simultaneously.  It's not hard to do,  but it does mean changing the way that meals are planned.

I'm not sure how this started,  though the spectacular glasshouses of the wealthy in England at the time when the empire was large and expanding might be involved.  It must have been seen as luxurious to be able to eat tropical, or even mediterranean delicacies throughout the year and while, to begin with only the very wealthy were able to indulge themselves,  improving transport, the ability to make ice and the upwardly mobile middle classes must have meant that, for a few at least,  the boring diet of local ingredients was left to the poor.

By now,  there is no one who expects to eat only those things that are produced within walking distance,  or even driving distance,  of home.  The "oil boom"generations have changed food requirements, food miles, carbon in the atmosphere and our environment drastically.  It's hard to see where this will end, except that the oil supply will not last, transport will become prohibitive, the environment will change and people will need to work out how to eat "fresh and local" again.

This has been an unusual winter.  It began with a real "Indian summer" with vegetables that hould have died off still producing, setting fruits, until well into May and June.  Then,  after several dry years, where priorities have been water storage, short showers and using second hand water for all sorts of things,  June and July turned out to be wet enough to have some luxurious long showers, rinse dishes under running water and take the easy way out with pot-plants (using a hose.)  By the end of July, we had had as much rain for the seven months as we had over twelve months in the past two years.  Despite threats of el Nino (and that means drought here) live seemed easy.

August has been different too.  It is supposed to be the end of winter.  There has been very little rain, several frosts and cold, cold days.  Maximum temperatures have been around 10C - 18C for the past couple of weeks…. and that is cold for here.

The soil is now cold.  Gardening has become more of a weeding and soil preparation job now.  I have dug a few patches that had weeds in them,  turning the weeds in (in the same way as "green manure") and I've added some rock dust to a few places that I am expecting good things from in the summer.
I have been harvesting enough food to be able to avoid the shops.  Current favourites are beetroot, kale, silver beet, potatoes (that I harvested a couple of months ago when the plants died off) carrots, and plenty of herbs.  Despite the birds eating a lot of the leaves from the pea plants (ordinary ones and snow peas) I am still able to pick a few.  I have a few frozen broad beans left (these make really good risotto) and the pumpkins are only half gone.

This morning…..  the boad beans are flowering and all that is needed now is a bit of warm weather to set some pods…. 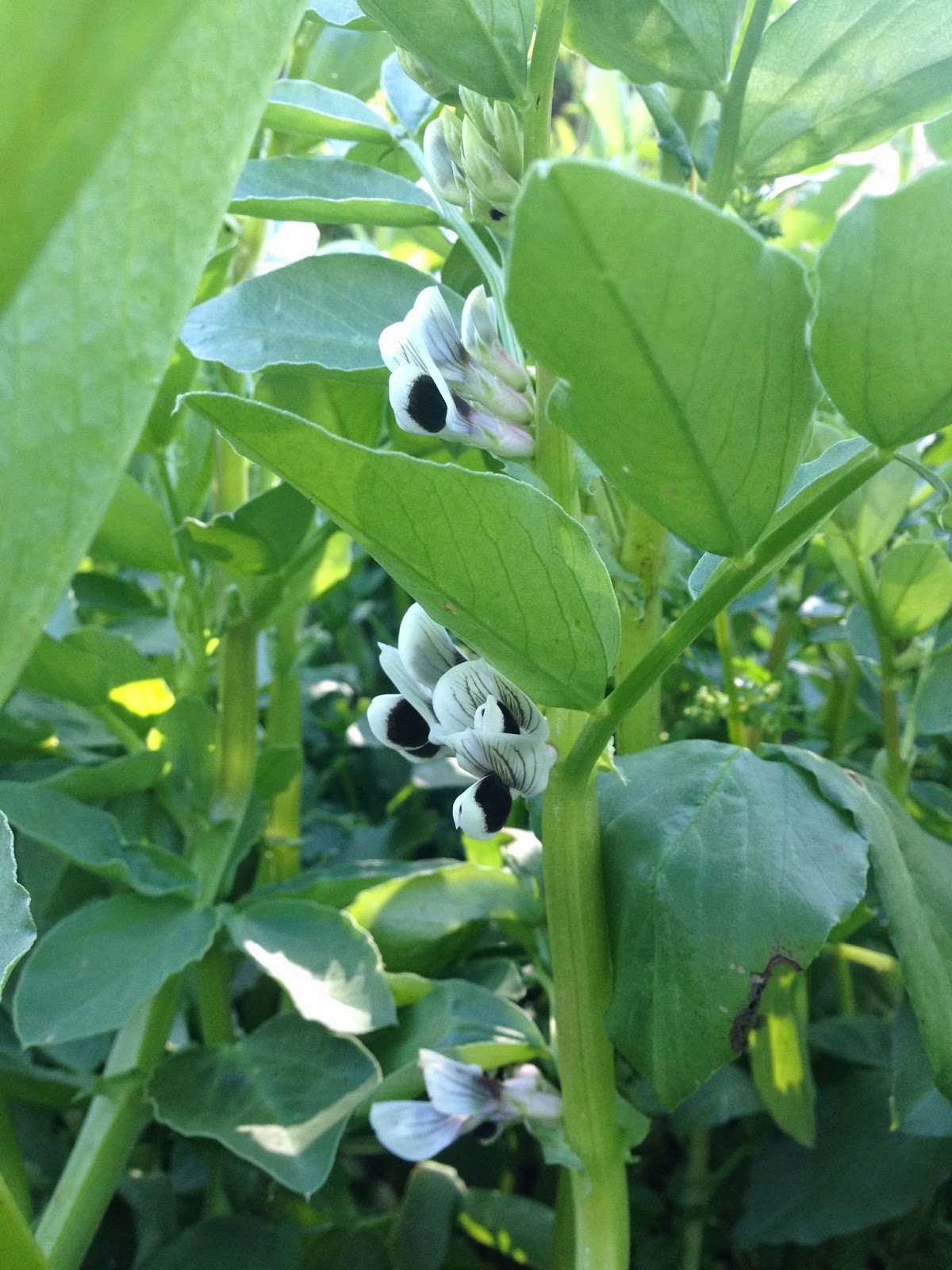 ….  the cabbage that sowed itself in the pathway is looking good.  This year I planted more cauliflowers than cabbages, and those were good,  the cabbages are all coming along nicely.  I have found another self-sown one as well….  in a pathway (making mowing hard to do in that spot!) 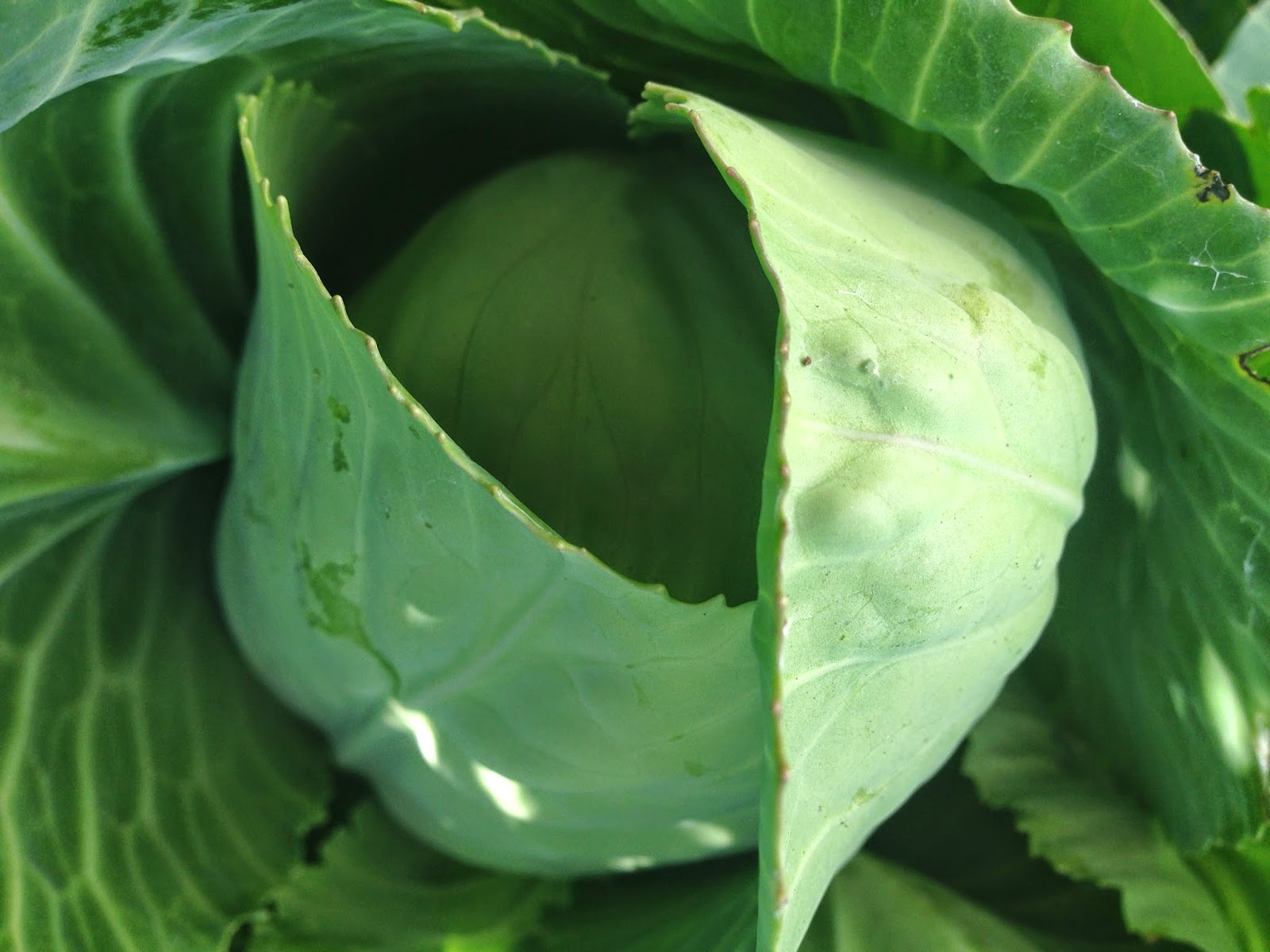 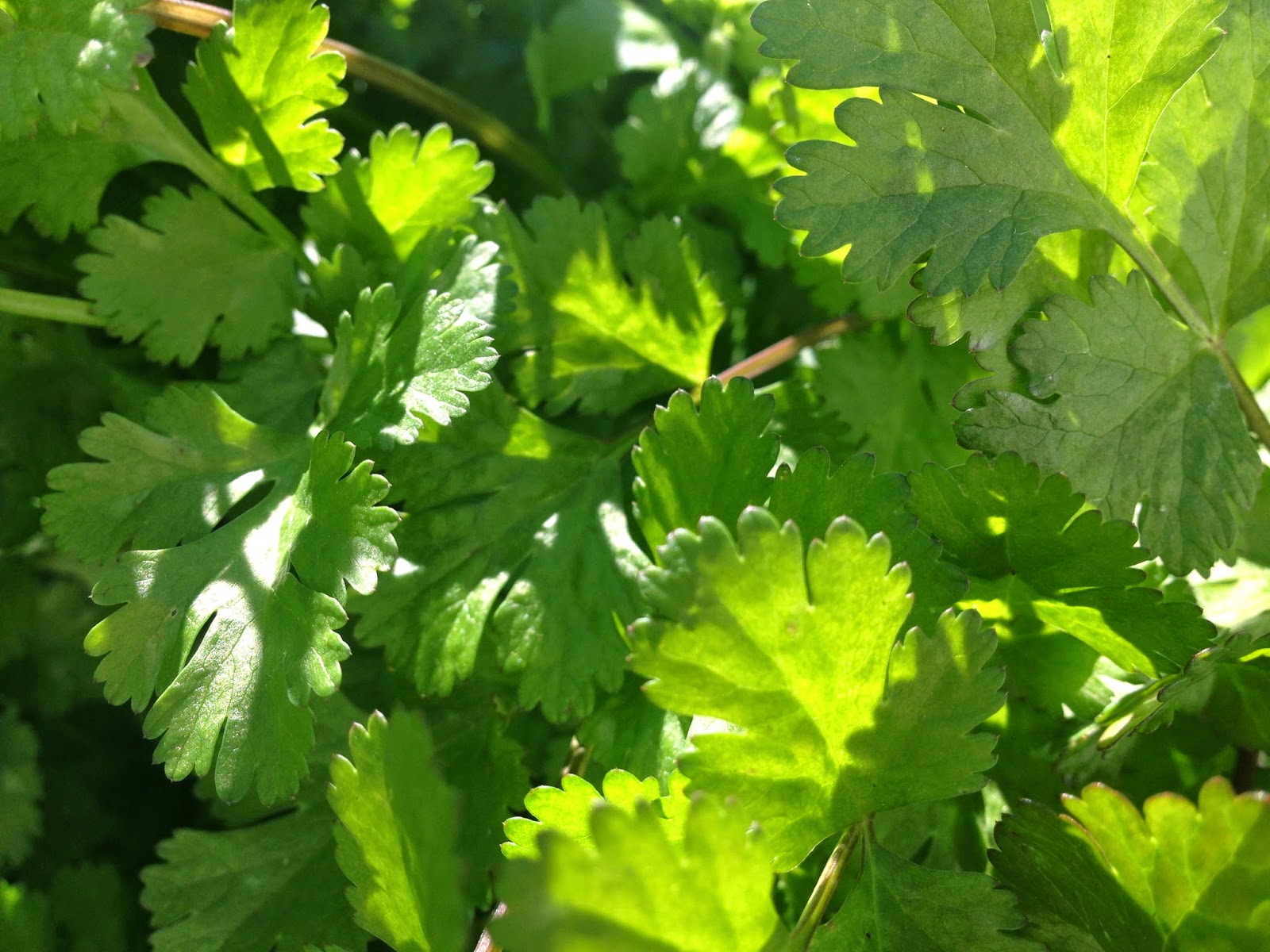 ….. and plenty more,  annuals and perennials.  This is the time of the year when thyme seems the tastiest too…  not sure why.

This Russian kale is self-sown.  It grew among the potatoes and when I harvested thos a few weeks ago,  I left the kale.  I've planted seeds in that patch now (they are mostly up) but the kale remains.  This is the variety that seems to be less bothered by cabbage moths and their green caterpillars (I have some thoughts about that,  but that is for another day.)  This plant has changed colour with the frost…. 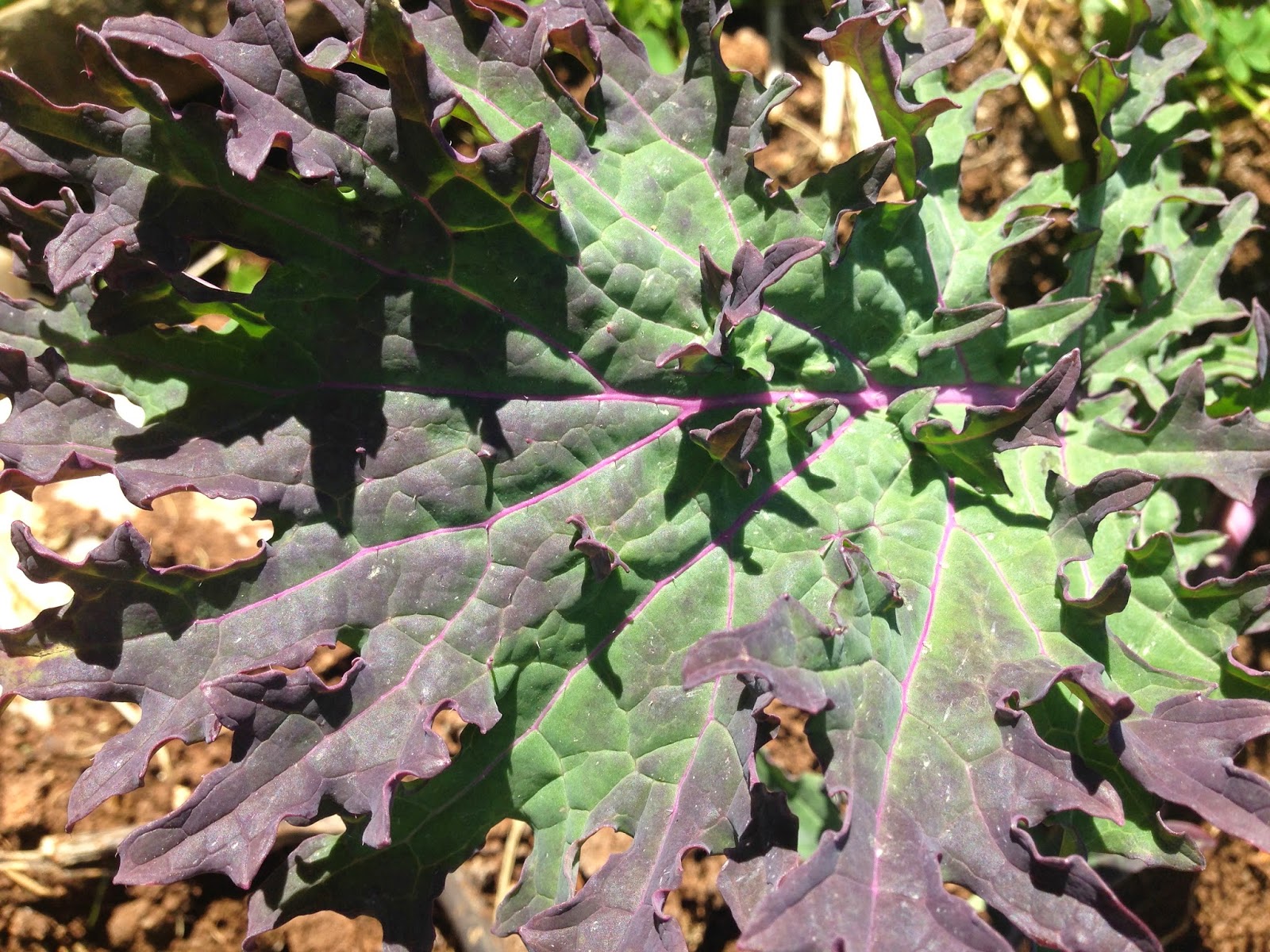 … it had a little bit of purple in its leaves all along,  but after a coupld of frosty nights,  the purple patches were significantly greater….  I suppose the plant is withdrawing the chlorophyll from the leaves… it must be one of the more costly appendages to lose in a frost…  it's like deciduous trees turning red or yellow before dropping their leaves in autumn… or gum leaves turning red or purple before they are discarded.  These plants are smart.

It's time to order some seeds from the catalogue and start some of them off inside…  ready for when the sun returns, the soil re-warms and garden work gets busy.
No comments:

How time flies….  I hadn't planned to have such a gap in posts,  though it's true that life in the garden slows down in winter.  This year the cold weather came late but when it did come,  it was very cold.  We have had the coldest night (with a frost) for 126 years this year.   The garden is still producing enough food for me,  though, with the cold temperatures,  it seems to be occurring in slow motion.  I keep thinking back to the Q10 temperature coefficient that I learned about so many years ago.  Chemical reactions are slowed by reduction in temperature.  Biological reactions have a Q10 value of about 2 ~ 3.  This means that reactions in biological systems are more-or-less doubled for every 10C degrees in temperature.
As an aside,  this is the reason that warm blooded animals have been fairly successful… their chemical reactions are maintained at the same rate no matter what temperature it is "outside" the body.  Lizards and snakes and other "cold blooded animals" need to "shut up shop" in cold weather and wait to be able to warm up using the sun (solar) energy.
The same thing applies to plants and there are a number of strategies for plants to survive cold weather. (Hot weather is a whole other issue and I'm not thinking about that here.)  In cold weather,  plants have a slowed metbolsim too… they grow more slowly, some live as annuals, dyng of the cold and leaving seeds to wait for warmer weather and some are just able to survive, despite the cold days (even frosts) though growing more slowly and unevenly,  depending upon the particular season.
So this year,  cultivated vegetables have grown well around here until the last 6 weeks.  The early part of the winter was unseasonably warm and despite the shorter days (less ultraviolet light for photosynthesis) the vegetables plants grew well.  Now that the weather has changed and weather (especially nights) have been so cold… a few nights have been less than 0C… just!    The Q10 issue has kicked in though,  and plants,  with no temperature regulation system to speak of, have slowed down considerably… some plants more than others,  but the whole gardening agenda has slowed as well.
Food these days is different from summer.  There are no fresh tomatoes.  I did see some in the local shop the other day and even those (glasshouse "tennis balls") were off-putting.  I can't imagine buying tomatoes in the middle of winter!  The description of tomatoes being the "last straw" is best described in the first chapter of the book by Thomas F. Pawlick, "The End of Food" which I would recomment to anyone interested in food and nutrition.  Pawlick was able to bounce the tomatoes that he had bought off the back fence,  despite leaving them to ripen for a week.  "It bounced off, undamaged, like a not-very-springy red tennis ball."
But that is a digression.  I eat winter vegetables (and some that I have preserved during the summer) in this colder weather. That means potatoes, beetroot, carrots,  onions, leeks, leafy greens (silverbeet, parsley and kale  don't seem to mind frosts) and there are still a couple of cauliflowers and some cabbages… no summer treats,  but they will be here later, and all the more appreciated for the expectation!
The typical collection of food for dinner in recent days is something like this…. 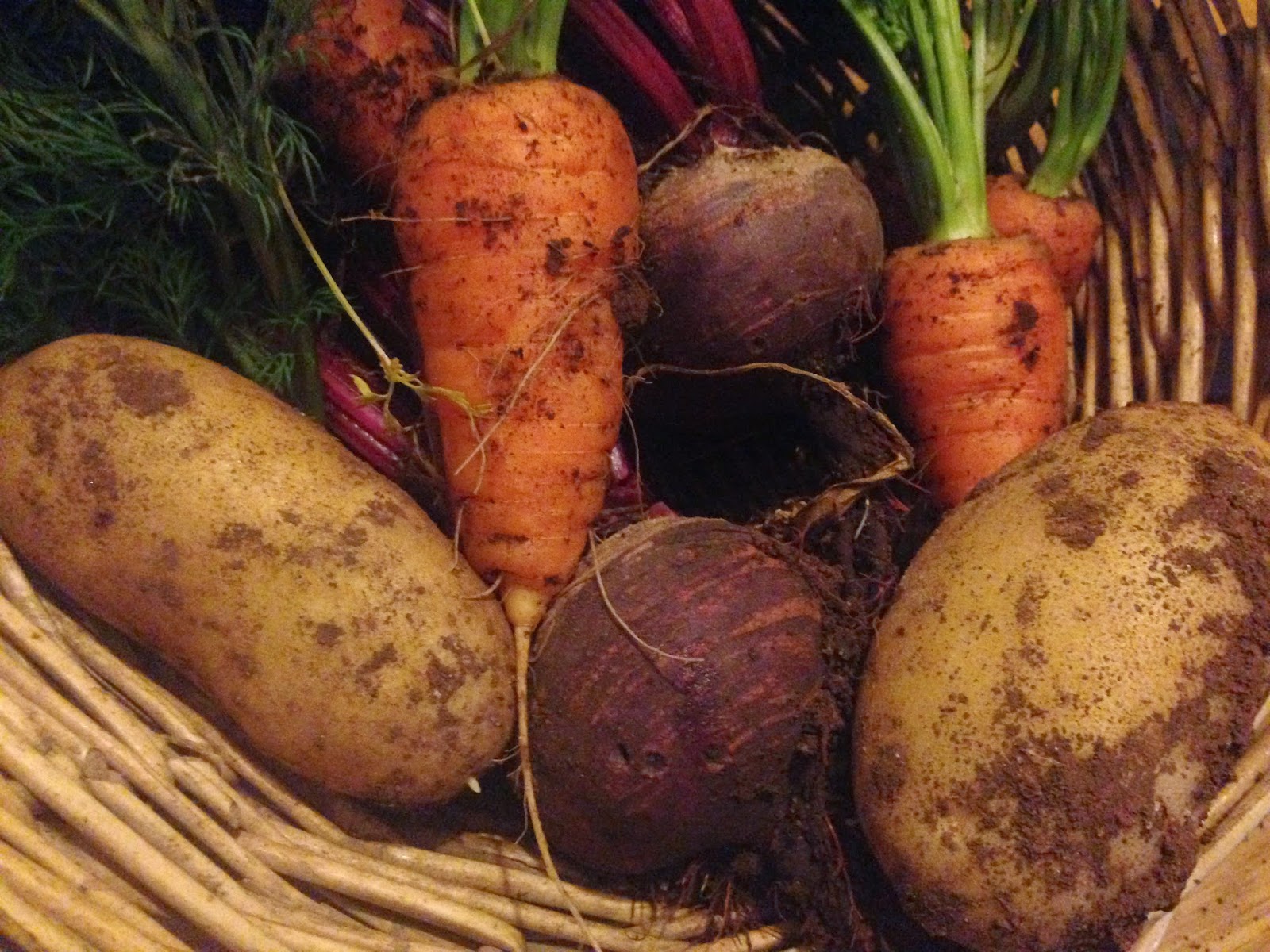 … and the "tops" of the beetroots are the "leafy green" vegetable and, as the chickens are still laying a few eggs, dinner is very very easy.

I have been pulling the carrots from the current rows in a funny sort of order.   They have grown really well from a packet of seeds from Diggers.  one of the plants was a bit odd…. 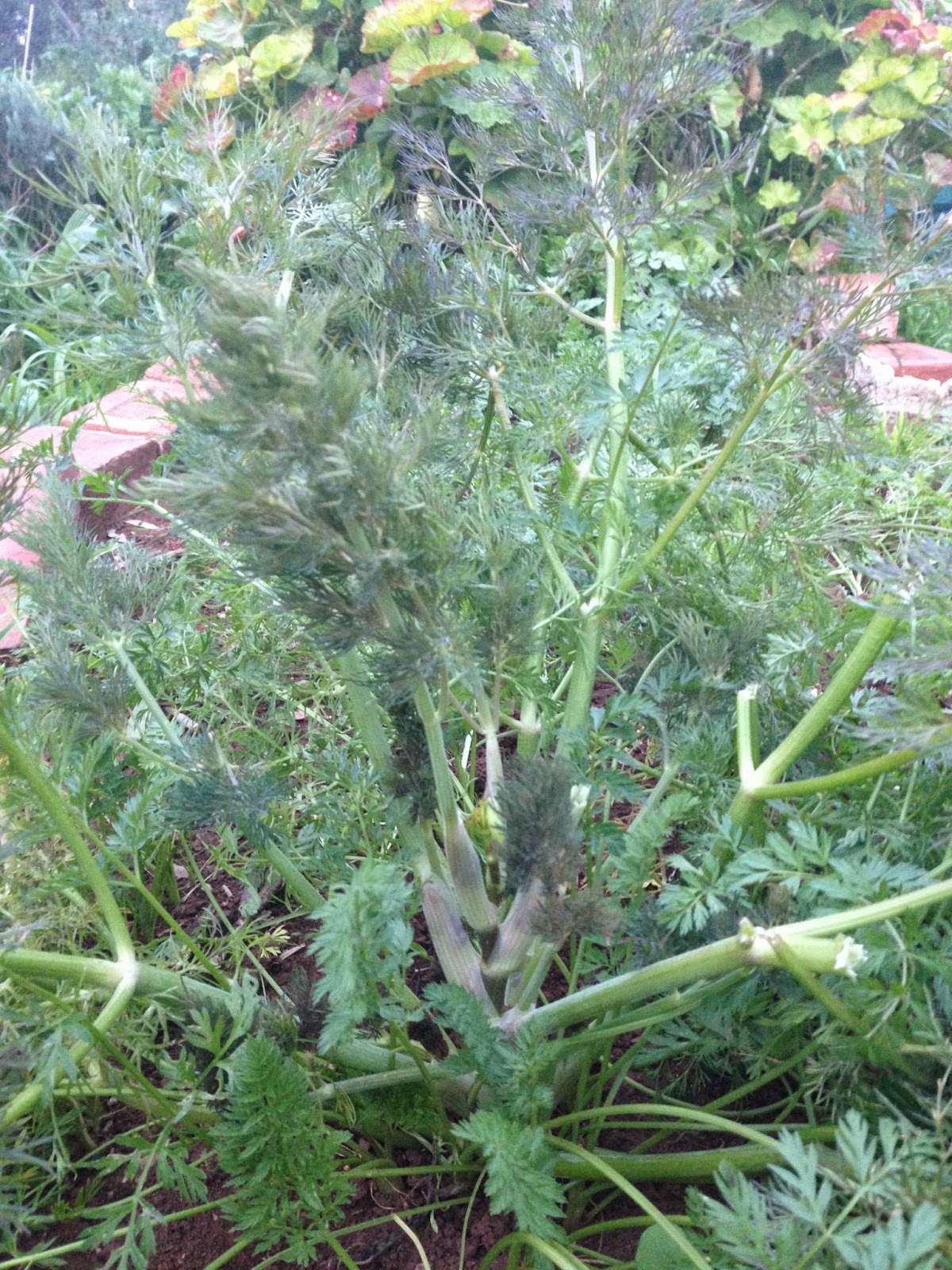 ….  it turned out that one of the seeds was a dill seed.   I have never been a fan of dill,  and so I hadn't grown it.  It turns out though,  that fresh dill is nothing like the bought kind… and especially different from the dill that is used to flavour pickles and preserved vegetables.  This fresh stuff is completely different.  I roasted the vegetables for dinner sitting on a cushion of dill instead of my usual rosemary and it is very, very good.

The next two rows of carrots don't seem to include any dill plants…. 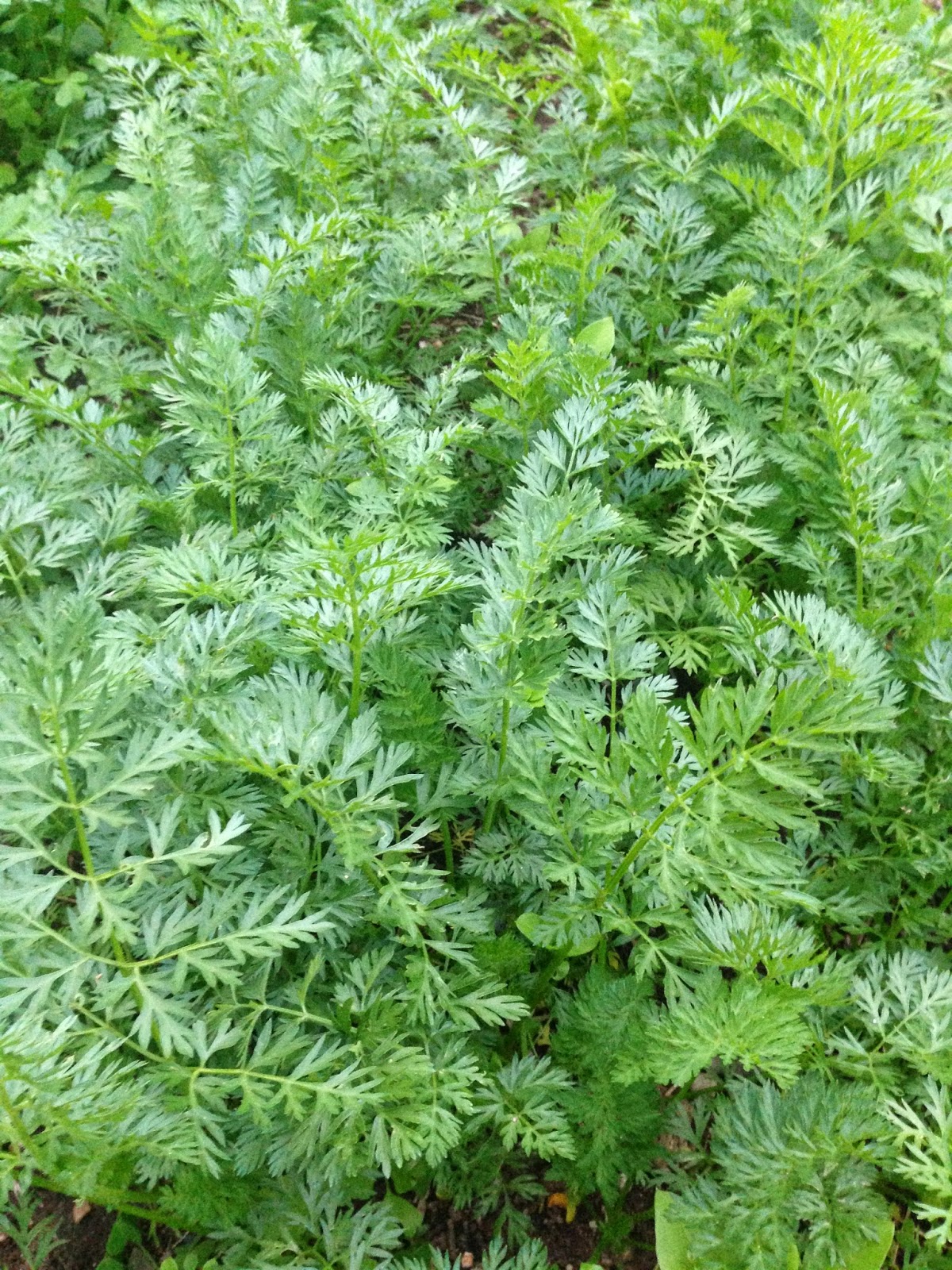 despite this being the other half of the same seed packet as the other couple of rows of carrots…. so I may let this "feral" plant go to seed…. and sed saving is a whole other issue…  and more of that later.