As I had commented in a previous post,  it has been a hot dry summer because of the influence of the el Nino that is spectacular, causing not only drought here,  but storms and flooding on the west coast of North America.  Even when such events are predictable (and some of them are becoming more and more so) they are hard to live with.  As I had already mentioned,  I have reduced my food production this summer because of the heat and lack of water.

It was just as well,  as I am also back to part time employment (I need to pay off some debts) and I'm not sure that I would have had the time to care for any fragile plants.

The time that I do spend at home is therefore focussed very differently,  but not wasted.  I have been enjoying the trees and outdoor 'living areas' more this year.  All of these areas are in parts that are not usually 'front and centre' on this blog.

The trees are lovely.... 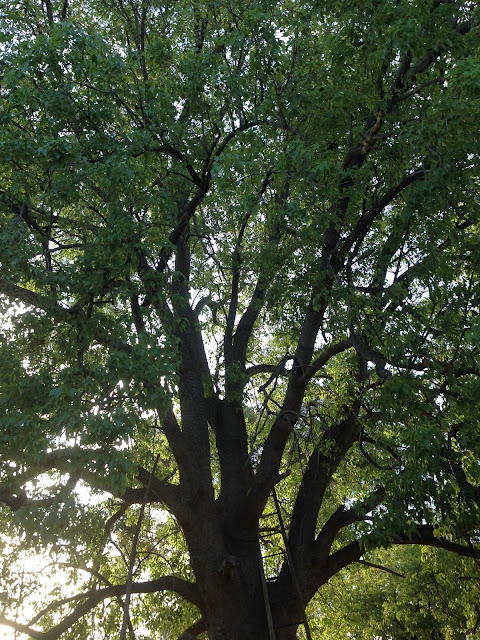 At the end of the pathway in front of the house is a lovely spot that can be quite a bit cooler than some places, even during the hottest days.... 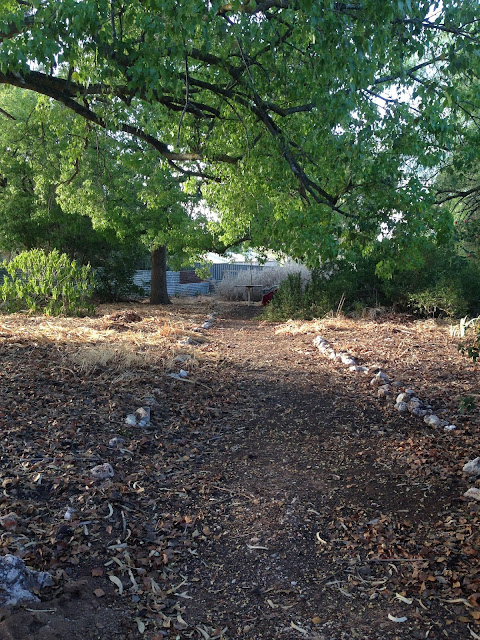 I have moved an old garden seat down to the end of the pathway.... 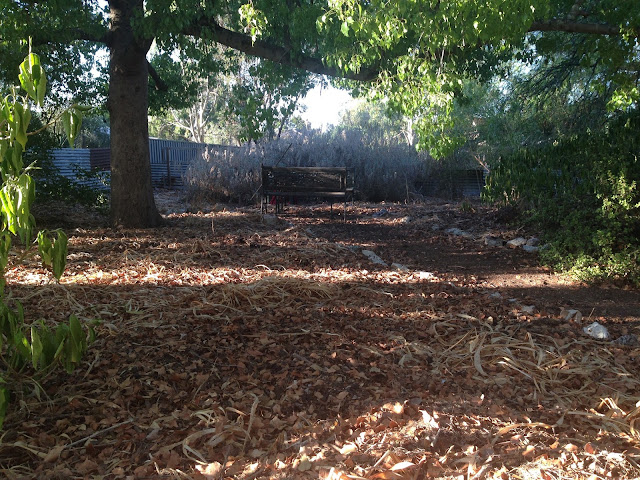 ... and it has turned out to be a good spot to sit and read in the cooler part of the day. 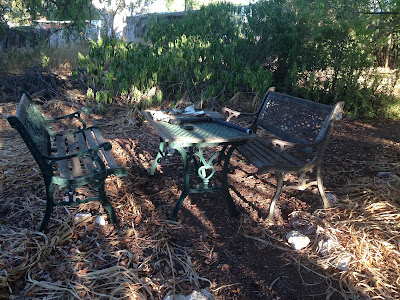 So my summer of less than favourable growing opportunities has not been wasted.  The treasures collected by my grandaughter during her last visit remain on the end of the table.  They don't interfere with my cups of tea.
No comments:

Organic gardening has become a term used to describe the production of plants using only 'natural materials' without the use of pesticides or chemical fertilisers.  There is a history of investigations, writings and practical advice regarding organic principles in farming and food production.  This fits well with the idea that we are a part of a closed system that includes all of the life on earth and even the planet itself, Gaia.  Chemicals used in the garden take significant energy to produce and transport and many of them persist for long periods of time.  When it comes to edible plants, those chemicals can end up in your food. 'Organic' has become a term to describe foods produced under particular conditions that need to be certified and sold as such.  Until relatively recently all food eaten by humans and other animals was 'organic'.

The Gaia thesis was put forward by James Lovelock and discussed in great detail at a conference held at the Wadebridge Ecological Centre in Cornwall (near Lovelock's home) in October 1987.  Discussions included the thesis, the mechanisms and the implications of this theory and has had profound consequences for the thinking about evolutionary theory, the organisation of living things and the prospect that Gaia is able to maintain stability despite environmental challenges in the same way that we understand organisms are able to do.

At first glance,  this sounds as though the whole system is able to maintain a habitable climate for humans into the future.  However, at second glance,  humans are forced to consider the fact that they are not 'guests' of the whole organisation,  but an integral part of a system that is going to maintain itself, even at the expense of humans... as it does at the expense of other species. The difficulty for humans seems to be that they do not consider themselves as a part of the environment, but resident guests who are able to manipulate the system to suit themselves.

There had been hints at the problems with agricultural production as soil fertility declined in the past.  Darwin wrote about the usefulness of earthworms and their ability to improve soil.  (My grandmother judged the health of soil by the presence of earthworms.)    There were other authors who realised that fungi and bacteria were contributors to soil fertility.  The soil was seen to be improved by the addition of organic material, composting and with further analysis, particular minerals were found to be important.

With improving technology and seemingly boundless supplies of cheap energy,  it became more profitable to farm huge areas, not by 'organic' means,  but by adding minerals (the first one being phosphorus) and using farm machinery that reduced the need for labour and increased production and profit. There were a few concerns from a some people promoting 'organic farming methods' even by the end of the 19th century.  By the time of the 'green revolution' phosphate was still being mined and added to farm soils,  but, depending upon the crop, nitrogen and potassium were being added in particular ratios… for poor soils, trace elements could be added as well, and we had 'super-phosphate'.  We no longer needed additions from the earthworms or the bacteria or the compost to produce bountiful crops and soil was degraded by their elimination until we had purely mineral soils with no organic matter or soluble elements.  The depletion of nutrients and degrading of soils was noticeable.  It was discussed.  It was written about by the promoters of 'organic" farming… Lady Eve Balfour (of The Soil Association fame),  Sir Albert Howard,  Ehrenfried Pfeiffer, Rudolf Steiner and, in more recent times, David Montgomery (Dirt: The Erosion of Civilisations), the Permaculture Crowd from Australia and any number of publications that encourage 'organic' gardening.

The mass production of food has meant that many soils are reduced to an inorganic substrate (comparable with hydroponic methods) that is sprayed with poisons and weedkillers prior to planting to sterilise the soil, then seeds and fertiliser are added (fertiliser is added at various optimal times during the growing season as well) and an 'efficient' crop is harvested when it is ready. Though it is only efficient if the added fuel, machinery and chemicals are not taken into account. The product is consistent, produced at minimal cost but may not be much like the original (historical) parent plants… for many reasons.  Nutrients and taste may be diminished as described by Thomas Pawlick in his book (The End of Food) where nutrients in some foods are so lacking (and poison so prevalent) that there is a question to be asked about whether they should be considered 'food' any longer.

All of this would be ok (while not optimal for health or vegetation) if it were not for the fact that arable land is being rapidly degraded, the human population continues to increase and the atmospheric changes wrought by our profligate use of fossil fuels in food production and climate control is beginning to change the weather systems, the ocean currents and the ability of many species to survive these changes.

The Gaia hypothesis suggests that the earth should be seen as a living organism itself… this idea having been first  proposed by James Hutton in 1785 (according to James Lovelock… that is the earliest reference that he could find.)  Hutton said that "I consider the Earth to be a super-organism and its proper study should be by physiology."  Lovelock has discussed this in much detail and his ideas are well known by now.  Lovelock was moved to add that the view of Earth from space when it was first seen by astronauts was disturbing…  "it showed us just how far from reality we had strayed".  Lovelock's first discussions added to Darwin's theory that, not only do species evolve,  but as they evolve, their environment changes with them and species that are successful are those that maintain a benign relationship with their environment.  Further, he said that Earth is a responsive entity that attempts (as living organisms do) to maintain homeostasis… that is keeping constant those conditions that we might notice… including climate and weather.  If the environment is stressed beyond its limits, then it must change to accommodate the stressors.  As conditions change, we may well notice changes in weather and climate.  Lovelock discusses the possibility of weather events being "harbingers of larger non-linearities to come if we persist in our experiments with the planet".  Food for thought?  When the damage done is irreparable,  the human race my well face a serious predicament  rather than just an aberration that will pass.

While I don't agree with all of Lovelock's remedies (notably his suggestion that nuclear energy could be a solution to energy needs that would not require a change in Industrial Civilisation… meaning industrial civilisation could continue as usual) I find his description of the predicament (from 1987) prescient.  In other words,  'business as usual' will lead to the predicted 'non-linearities' that we see as climate change.

Since living in my Kapunda Garden (and substantially feeding myself here) for 15 years (not long by planetary standards,  but longer than I have been allowed to remain in any place before) and learning to understand this tiny piece of the world,  I am just beginning to understand 'attachment to country' and the need for intimate knowledge of the soil with its micro-organisms, the plants and any interaction with the weather. This attachment to country comes from close observation over a long enough period of time to understand the soil, the plants and what their likely reaction to the weather might be. I am still learning.

David Suzuki calls the lack of attachment a 'nature deficit disorder'.  I don't know where this will end, but I am not hopeful.  I persist with 'organic gardening' and hope for the best.  My garden is suffering from a very difficult el Nino this year, and next year is still unknown.

Lately I have grown prickly pears… one of the few fruits that will produce with almost no water.  This year the first mass of flowers…. now to wait for the fruit…. 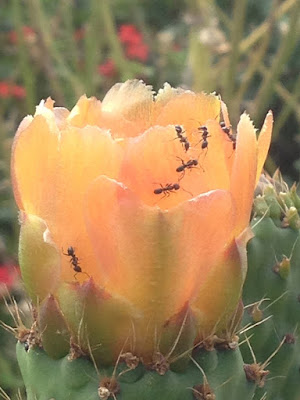 In future, I can see the lack of rain and hotter summers being more frequent.  Learning to live with this environment is my task.  Having the least impact on the environment (Gaia) is my responsibility not just for my won sake,  but for the sake of generations to come. I have grandchildren.

It has been a long time between posts, and there have been a lot of reasons for the change in my posting, commenting and thinking… 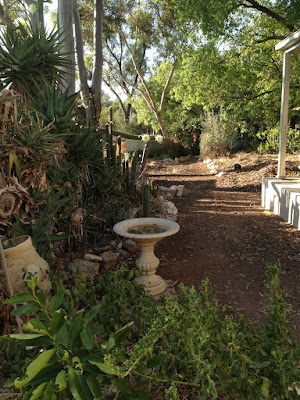 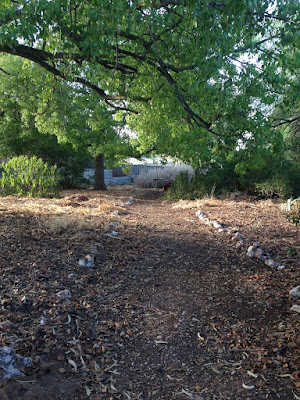 In recent years,  I had already been growing much more (in the food garden) during the winter than I had in the summers.  Heat is the main problem and this year has already had a number of days well over 40C  (104F) with almost no rain for more than two months so far….  rain is not usually expected in any quantity until April or May in this region… and so there is quite a way to go yet.
Last winter (much like several before it) I had preserved (bottling and freezing) extra food for the summer season.  Traditionally this has been a summer activity,  but here,  with the best growing season being in winter,  there is no reason to maintain that regime.  It is still useful to grow some fresh 'summer' foods in small quantities (even in pots that can be moved to avoid the worst of the heat) but the 'summer  glut' of vegetables is not the 'usual' here from now on. 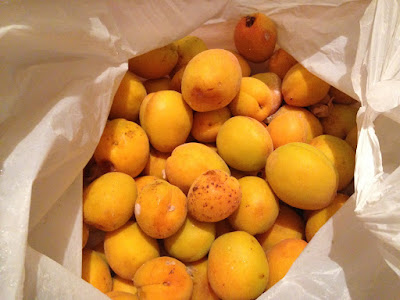 Well established trees, even in very 'difficult' areas, continue to produce.  These apricots are a gift from a friend with a tree that is further north (hotter and drier) than Kapunda.
Consequently,  my plan to grow several different fruit trees is taking shape.  "Taking shape" in more ways than one, for my trees will be espaliered in order to keep the leaf/root ratio low and the fruit more accessible and able to be netted (bird protection) in later years.  But more of that later.
The blog is back within reach and I there is much that I have been thinking about gardens, farming the soil and a little bit of self sufficiency.