This is getting to be a habit.  Another two months have gone by without a post!  In fact,  I have been pretty sick during the past winter.  And I am not the only one... there seems to have been a nasty bug around.  Right now,  I am getting a lot better and feeling very, very relieved.  I had begun to think that  this was just 'old age' and that this might be the new normal!  It isn't.  I am feeling a lot better.

The winter has been unusual.  It hasn't been too terribly cold, very few frosts and then they were only mild; but we have had a lot of rain, much more than usual, and despite the flooding in many areas, this will 'set the soil up' for several years to come.

The extra rain has also been very good for the weeds!  Winter grasses and flowering weeds have done extremely well and I have a lot of work ahead of me to catch up.  And so, this morning was day #1.  I have spent an hour in one particularly overgrown patch which has featured as a corn, beans, pumpkin patch in the past.  It doesn't look pretty, but with a bit further cleaning up,  it should be useful again.
There is a tiny fig tree that I planted last autumn,  and that has survived the weeds, and I am hopeful that eventually it will take over this patch.  The pile of weeds in the background will be given to the chickens, and the wooden frame in the middle (Jessie's grave) will have flowers again.... perhaps some succulents this time.... 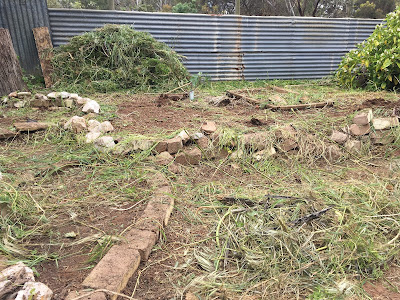 The tools await my next foray into 'enemy territory'. 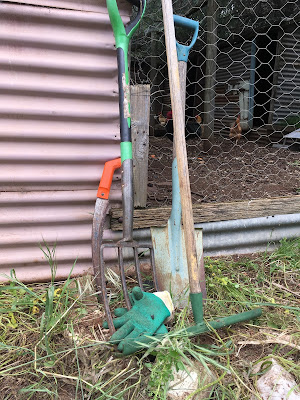 Nearby is still this beautiful geranium (actually a pelargonium, though the monks who mixed them up centuries ago keep us in confusion.) 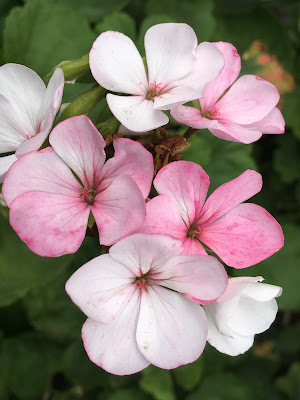 On the way back inside I bandicooted potatoesm, collected eggs and found some spring onions for some potato pancakes this afternoon. 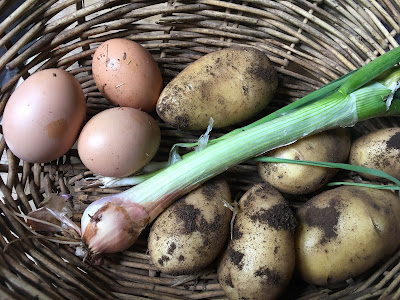 There is still a lot to do, and this year I may need some back-up help after getting so far behind with the weeds... we shall see.