The autumn bulbs have been late this year... blood lilies are still out there being raided by the honeyeaters,  though not for much longer,  I suppose. 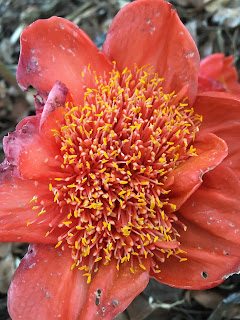 They are already beginning to look a little the worse for wear.  The honeyeaters are rough on the petals.

The prickly pears were less abundant this year, perhaps due to the late spring,  I am not sure,  but they were later than usual and there were less of them.  They do make beautiful icecream! After a late spring, moderate summer and an autumn that seems not to have brought much change until now,  suddenly, it feels like winter.  The climate certainly is becoming unpredictable.

The summer vegetables have just about finished.  Their self sown replacements are already showing their greenery.  I have also planted the broad bean seeds (usually about Anzac Day) and some "winter seedlings" are planted.  So far, so good. I shall wait to see how the season unfolds.  Meanwhile,  weekend afternoons on the verandah are most enjoyable. 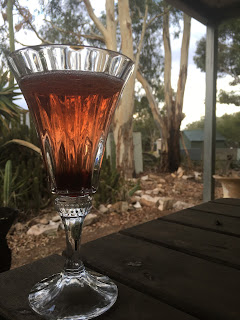